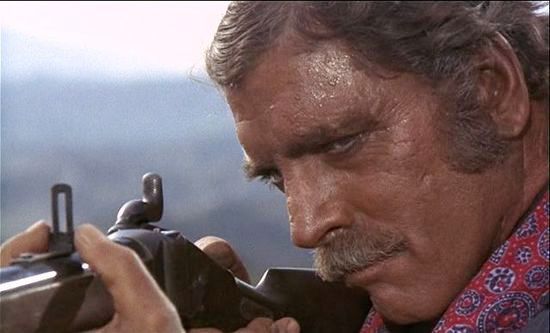 Let's get one thing out of the way first: Burt Lancaster does not pass for Mexican, or even half-Mexican, even with the help of a deep tan and possibly the judicious application of brownface makeup.

One of the stupidest and most useless human endeavors is the imposition of modern sensibilities upon cultural material from years, decades or even centuries past. Of course people in 1971 didn't think about cultural appropriation the same way they do in 2018. Caucasian actors routinely played Latino, Arab, Asian and even African characters in Hollywood movies up until fairly recently in our cinematic history.

If John Wayne can play Genghis Khan and Laurence Oliver can play Othello, then I'm not going to get too worked up over Lancaster posing as an over-the-hill Mexican-American lawman.

He pulls off the accent pretty well, playing Bob Valdez, the constable of a small border town somewhere around the turn of the century. His authorities extend only to the "Mexican half" of the city, perhaps owing to his title of constable rather than sheriff (as many references to the film erroneously call him).

It's not even a full-time job, as Valdez supplements his income riding shotgun for a shipping company, and he travels to and fro riding a wagon rather than a horse. He's bordering on elderly, and doesn't even carry a six-shooter, the standard arm of the Western hero, but a two-barrel scattergun -- the weapon favored by those with failing eyes and shaky hands. Valdez shuffles about in an obsequious manner, and speaks to the wealthy whites who run things with shoulders stooped and hat in hand.

Valdez clearly doesn't like having to kowtow, but it's how he gets by in a land where his kind is dismissed as "greasers." At least, that is, until he finally gets pushed too far.

The story opens with an ugly scene, where a posse has trapped a man suspected of murder in a lonely shack, and a crowd of women and children has gathered to watch as the men playfully plug bullets into its bleached-out boards. The accused is a black man, so it seems the standoff will end either with a lynching or a hail of rifle rounds.

Valdez walks down to talk to the man in an attempt to deescalate the situation. But a hotheaded young sharpshooter named R. L. Davis (Richard Jordan), operating at the behest of Frank Tanner (Jon Cypher), the rich cattleman leading the posse, fires in the middle of Valdez' parlay with the accused, making him think the whole thing has been a ruse. Valdez is forced to kill the man, after which it becomes clear he was innocent after all.

To me, the most interesting part of this sequence is not all the manly strutting and pronunciations. It's the part where the holed-up man's wife, an Apache woman, blithely walks out of the house during the barrage to fetch a pail of water. R. L. repeatedly shoots near her to scare her off, but she doesn't even flinch.

Valdez decides to take up a collection as a gesture of goodwill to the widow, and the townsmen agree to put up $100 if Tanner will pay the other $100. Tanner angrily refuses, first having his men shoot at Valdez, in much the same way R. L. did at the Indiana squaw, and then resorting to crucifixation when he returns for another try. That's when Valdez snaps and vows revenge.

(Curiously, Valdez himself never offers to pitch in any of his own money toward the sum, even though he was mostly directly responsible for the murder.)

The rest of the movie follows a fairly traditional revenge/redemption cycle. Valdez takes up arms and his old uniform, revealing that he was a U.S. Cavalry soldier during the Indian wars. He stalks Tanner and his men, picking them off in ones and twos. His favored method is a Sharps rifle, a single-shot weapon notorious for its long-range accuracy.

"Valdez" was directed by Edwin Sherin in his feature film debut behind the camera. He would direct one other movie later in 1971 before turning to television, where he worked busily well into the 2000s. Screenwriters Roland Kibbee and David Rayfiel, adapting the novel by Elmore Leonard (unread by me), keep things taut and spare, with nary a spoken word or image that's not absolutely necessary to the plot.

Frank Silvera plays Diego, a humble Mexican farmer and Valdez' best (possibly only) friend, who helps him recover from his wounds and is made to pay for it by Tanner's gang. Héctor Elizondo turns up in one of his earliest screen roles as a lookout for Tanner's gang. Mason (Phil Brown) is the chief of the white aristocracy, notable for sharing a degree of respect with Valdez.

Barton Heyman plays El Segundo (literally, "The Second"), Tanner's right-hand man, who proves far cagier than his boss. He repeatedly urges Tanner to break off from pursuit of Valdez to go through with a lucrative sale of rifles to the Mexican army. Segundo would seem to be a standard Western henchman at first, but as more of his men perish he carefully weighs the loss of life against any possible benefit. He eventually gains the upper hand over Valdez, but not before developing a health reverence for the old man's skills.

The other major character is Gay Erin (Susan Clark), who is Tanner's consort and, at least at one point, his betrothed. The whole story has been set off by the murder of her husband, Tanner's friend. Tanner carries on the quest to find the killer mostly because many people believe Tanner himself killed him to get Gay.

She's a proud woman who seems to despise Tanner, and yet on some level embraces his dastardly nature because she think she deserves no better. About halfway through the movie, Valdez takes her captive and tries to use her as a bargaining chip for the $100. It's a classic fruitless quest, since the Apache woman has long departed to return to her people. Valdez treats Gay tenderly, but without any suggestion of romance.

Tanner himself is an interesting character. He cuts an imposing yet slightly comical figure, with hair and mustachio suggesting a resemblance to Colonel Custer. He revels in the power of having his own gang, enjoying giving orders to torture somebody who has bothered him: "Fix him like we did that other fellow." But in the end Tanner reveals a distaste for getting his own hands dirty.

"Valdez Is Coming" ends with an odd standoff, with no overt resolution. It would seem impossible that events play out in any way other than with Valdez' death, but you never know. It's a grim story of lost causes embraced and good intentions wasted. And maybe how we should treat the meek a little nicer.