Video review: "Only the Brave" 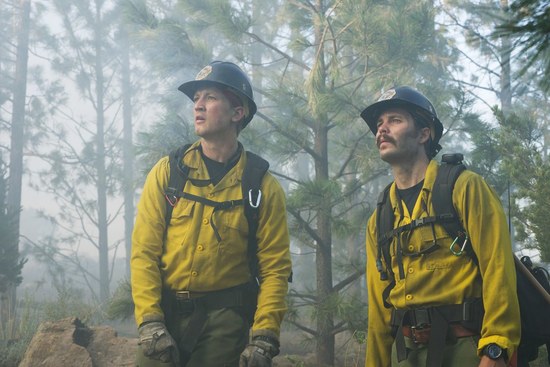 It didn’t gain a lot of enthusiasm during its theatrical run, but “Only the Brave” is a sturdy, well-acted drama about the Granite Mountain Hotshots, an elite group of wildlife firefighters. They’re the sort of guys who run into a gigantic blaze threatening to overrun towns, while everyone else is fleeing the other way.

Josh Brolin plays Eric Marsh, the veteran leader of the Hotshots, and this may just be the finest performance of his career. Resembling Paul Bunyan mixed with Teddy Roosevelt and a little bit of hippie thrown in, Eric is a tough, strong leader who’s determined to see his band of upstarts attain the highest certification for fighting wildfires -- the first municipal outfit to attain that rank.

Eric reads the movements of a fire like an expert tracker stalking his prey, communing mystically with an enemy he strives to defeat.

Miles Teller plays Brenda McDonough, the newest recruit. He’s a junkie wastrel trying to turn his life around in the aftermath of an unexpected pregnancy by an ex-girlfriend. Eric sees some grit behind the younger man’s smirky façade, and takes a risk on him.

Jennifer Connelly plays Eric’s wife, and I was glad to see the Oscar winner given more to do in this Y-chromosome-heavy flick than just sit on the home front and pine for her man. There’s pain in the couple’s past we don’t expect to encounter.

A very old-fashioned sort of filmmaking -- it’s essentially a war movie with fires swapped in for terrorists or Germans -- “Only the Brave” has heart, vitality and unexpected wisdom.