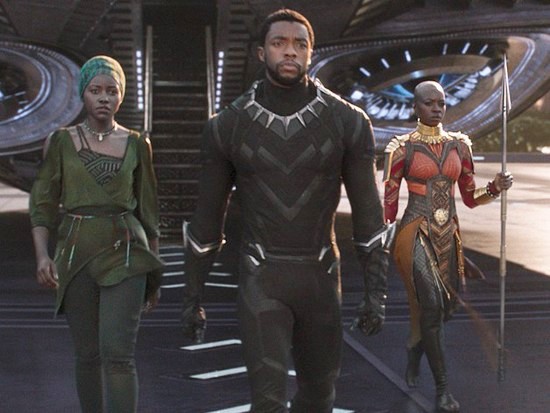 “Black Panther” is an invigorating but hardly revolutionary entry into the Marvel Comics Universe, taking the African king who wears a (mostly) indestructible cat suit we saw in the last Avengers movie and draping a colorful backstory around him. Chadwick Boseman plays T’Challa, ruler of the fictional kingdom of Wakanda, in a calm and charismatic performance that foretells many happy returns for this character in future MCU movies.

Rather than a traditional origin story, we get the fall-from-grace saga: T’Challa assumes the throne after the death of his father, and with it the powers -- courtesy of a mysterious flower pod -- and costume of the Black Panther. But almost just as quickly, he finds his leadership in question and his very claim to the throne challenged.

Directed by Ryan Coogler (“Fruitvale Station”) from a script he co-wrote with Joe Robert Cole, “Black Panther” will resonate with some for its nods to the Black Power movement of the 1960s and its more recent echoes. White characters are few; when they do show their faces are derided as “colonialists;" and the taint of slavery is frequently brought up in describing the fate of black people, both in America and Africa.

But these aspects struck me -- a white kid from the suburbs -- as merely fashionable put-ons for the young and hip, flashy decorations over the familiar bones of superhero tropes.

T’Challa operates as a sort of royal James Bond who’s not just an agent of the coolest cloak-and-dagger outfit in the world, but is actually running the whole show. He’s even got his own Q-like gadgetmaster, in the form of his kid sister, Shuri (Letitia Wright), concocting playful new toys to augment his super-suit.

Wakanda is viewed as a poor third-world nation, but actually is the most technologically advanced people on Earth, helped by a vast store of vibranium that fell there in the form of a meteor long ago. The strongest substance in the universe -- but wait, I thought that was supposed to be admantium? -- vibranium has all sorts of cool abilities to absorb and transmit energies. This allows Black Panther not only to jump and scratch, but set off mini sonic explosions.

It seems a nasty mercenary named Ulysses Klaue (Andy Serkis) stole a store of vibranium 25 years ago, and now it falls to T’Challa to bring him to justice. He’s helped by Okoye (Danai Gurira), the head of his personal guard, who are all very stern-looking, bald women, as well as Nakia (Lupita Nyong’o), a Wakandian spy who also happens to be T’Challa’s ex.

The X-factor, who shows up rather late in the game, is Michael B. Jordan as Killmonger, an American former special ops soldier/assassin who at first appears to be working for Klaue, but turns out to have a very dark connection to Wakanda, which I’ll not spoil here.

Also turning up are Martin Freeman as a helpful, if naïve CIA agent; Angela Bassett as the queen mother; Forest Whitaker as the Wakanda high priest; Daniel Kaluuya as T’Challa’s best pal; Winston Duke as the head of a rival tribe; and Sterling K. Brown as another member of the royal family.

“Black Panther” certainly is one of the most visually sumptuous films in the MCU, with a pageant of bright costumes, stunning CGI technology and colorful vistas. The hidden Wakanda capital city looks like some glorious cross between “Blade Runner” and “Zootopia.”

I enjoyed the movie, but didn’t come close to being blown away by it. The hype machine has been cranked to 11 for this film, which turns out to be a low 7, at best.