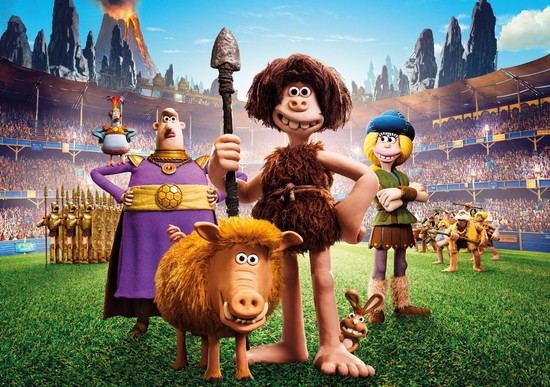 I’ve always admired stop-motion animation in general and the British Aardman Animations films in particular -- “Chicken Run,” “Wallace & Gromit: Curse of the Were-Rabbit” and “Shaun the Sheep Movie” most recently in 2015. So it gives me little pleasure to report that the latest, “Early Man,” is a rather lackluster affair.

The story of cave men who discovered what we Yanks call soccer, it quite literally drops the rock… er, ball.

It seems our hirsute ancestors were inspired when a meteor landed somewhere around modern Manchester, snuffing out the dinosaurs to boot. The cave men began kicking the hot rock around, created a game around it, and even made drawings about their exploits.

Fast-forward a few thousand years, and a tribe of Stone Age types are still dwelling in the bucolic valley where the game of football (the everywhere-but-America kind) got started. Eddie Redmayne provides the voices of Dug, an excitable young man who urges the tribe to aim higher than just hunting rabbits -- perhaps even mammoths?

The Chief (Timothy Spall), a wise elderly man at the ripe old age of 32, cautions against high hopes. But when they’re suddenly invaded by some well-armed Bronze Age types and thrown out of their valley, it’s up to Dug to journey to the Roman-style city of their enemy and figure out a solution.

Curiously, the cavemen lost the tradition of football somewhere along the way, so Dug is amazed to discover the city’s entire culture is centered around games held in a giant arena. The home team, Real Bronzio, made up of tall Nordic types, is always the winner, playing at the whim of the nefarious Lord Nooth (Tom Hiddleston). He’s also the guy who booted Dug’s tribe out of their home so he could dig for ore there, and is amassing a fortune by charging admission to the mandatory games.

One of the movie’s better running jokes is that bronze is used for almost everything, from weapons to currency to housewares. “Have you got change for a dinner plate?” one old lady inquires at the arena gate.

Dug challenges Nooth’s team to a match, with the fate of the valley in the balance. If the cavemen lose, they’ll be forced to work in Nooth’s mines. (Which seems like something he could’ve enforced with or without the game.)

They start training under the tutelage of Goona (Maisie Williams), a city woman who takes a liking to the plight of the prehistoric folks. Plus, she’s always dreamed of booting in a goal of her own, since Real (pronounced REE-yal) Bronzio doesn’t allow women.

It’s a decently fun flick, at least intermittently, directed by Aardman veteran Nick Park from a script by Mark Burton and James Higginson. The cavemen don’t have much in the way of distinct personalities -- there’s the burly woman, the dumb one who puts everything in his mouth, etc.

The scene-stealer is Hognob (voiced by Park), an animal companion of Dug’s who appears to be a mix of boar, dog and sheep. I guess he forms the critter triumvirate with Gromit and Shaun.

If you’re thinking it’d be wacky for Hognob to get into the game, you won’t come away disappointed. Which is more than I can say for me.