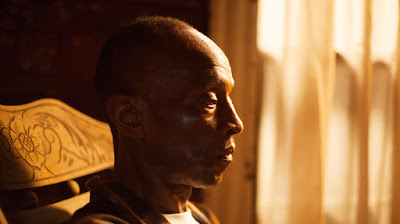 It’s a normal day at a grade school in the suburbs. A woman (an amazing Tarra Riggs) is relieving the front desk worker for her lunch break when a man (Bo Mitchell) walks in, pulls out an AK-47 and commences a standoff with police. He’s a white man in a nearly all-black school, so are his motives racism? Terrorism? Suicide? He seems confused, not very intelligent, but not especially belligerent. This tense drama from writer/director Reed Van Dyk explores the story behind a real 911 call, which unfolds in a way we do not at all expect.

Writer/director Kevin Wilson Jr.’s  starkly beautiful film, shot in slanted half-light, examines the tragedy of Emmett Till from the perspective of his family in Money, Mississippi, where he was staying when the 14-year-old from Chicago was brutally lynched for reputedly whistling at a white woman in 1955. His gruesome death, more than anything, was the match that lit the fire of the civil rights movement. Till’s abduction from his great-uncle’s house in the dead of night is portrayed with nail-biting clarity, with a powerful performance by L. B. Williams as the uncle, Mose Wright. The chills will linger.

This amusing little Australian comedy short pits two men in an office who each claim to be a psychiatrist: Dr. Terry Phillips (Josh Lawson, also the writer) and Dr. Nathan Kline (Damon Herriman). He’s meeting a man who delusionally thinks he’s a psychiatrist, so each thinks the other is there to see him as a patient. An argument ensues. Things hit their high point when they conduct word association tests on each other, with each man assuming the other one’s prompt is actually the response to his own prompt. Unexpected, and fun.

A young teacher named Joanne (Rachel Shenton, also the screenwriter) arrives at the home of a harried upper-class British family to instruct their 4-year-old deaf girl, Libby (Maisie Sly). Things go surpassingly well as she begins to learn sign language. But the mother, Sue (Rachel Fielding), feels shunted aside as the younger women quickly forms a bond with Libby that has escaped her. Tender, wise and sad.

A young Christian woman is traveling along the border of Kenya and Somalia to care for her sick mother, in a region where Christians and Muslims often clash. She refuses to interact with the Muslim passengers of their bus, citing past tragedy in her own life. But when gunmen from the terrorist group Al-Shabaab rear their heads, suddenly a community exists where there wasn’t one before. Sharply told and authentic, based on real events.