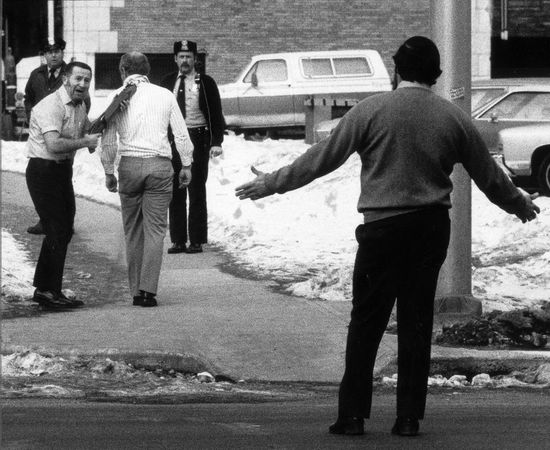 The image that first grabs you is of two men walking in their shirtsleeves, which immediately sticks them out of place against everyone heavily bundled up in the bitter Indianapolis February.

Both are in their 40s, sporting bald spots and those hellacious sideburns that were popular in the late 1970s, like psychedelic pyramids rooted on their cheeks. One is short, dark-haired, burly, sleeves rolled up over thick, hairy forearms. The other is taller, with the wispy remains of what was probably once a fine blond head of hair, the collar of his business shirt popped up against the cold.

The shorter man walks closely behind, a sawed-off shotgun pressed up against the base of the other's skull. He is screaming expletives at the police and gawkers in downtown Indianapolis, while the other man seems haunted, resigned, almost calm.

They are strung together by a thin wire that binds the gunman's hand to the weapon, and the gun to his victim's neck. He calls it a "dead man's line" -- his nearly invisible assurance that if he dies, from a sniper's bullet or such, the gun will go off and end the other. The police, helpless, keep their distance.

This went on for 63 hours, as car salesman and erstwhile real estate developer Tony Kiritsis held mortgage company executive Richard Hall hostage in a dispute over a piece of land where Kiritsis wanted to build a grocery or other big store.

After a rambling one-hour "press conference" carried on local and national TV in which he was assured that he would not be prosecuted, received an apology from Hall's Meridian Mortgage company and a promissory note for $5 million, Kiritsis let Hall go and was promptly arrested -- but not before pumping off one blast out a nearby window to prove the shotgun had been loaded.

Despite being one of the most famous crimes in Indianapolis history, the Kiritsis hostage crisis has faded in memory since 1977, laughed off as one of the city's most bizarre incidents but never deeply explored. After being found not guilty by reason of insanity, Kiritsis was released in 1988 and lived out the rest of his years in quiet, never speaking about the incident. Hall also largely kept his mouth shut, until finally publishing a book about it last spring to coincide with the 40th anniversary of the event.

Now two local men, Alan Berry and Mark Enochs, both marketing writers by day, have given us the definitive history of the incident. Their splendid documentary, "Dead Man's Line: The True Story of Tony Kiritsis," will be released online on Feb. 8, available initially on Amazon and iTunes.

It's a painstaking recreation of the kidnapping from start to finish, as well as exploring Kiritsis' troubled life beforehand plus the resulting trial. Utilizing a treasure trove of news footage and photos -- much of it never seen before -- as well as exhaustive interviews with more than three dozen witnesses and participants, it puts the audience right into the fray with nail-biting intensity.

This is the sort of documentary that takes something that outwardly seemed ridiculous and tragic, and reveals it as the defining moment in two men's lives.

The Kiritsis that emerges from this portrait is a bundle of blue-collar contradictions. Braggadocios and foul-mouthed -- no doubt the wall-to-wall live coverage was the first time many heard the F-word spraying copiously from their TVs -- he also seems to have a comradely workingman's charm about him.

Friendly with many cops, he often singles one out for conversation or a quip in the midst of the crisis. When he's trying to make a point, he tends to drop the word "baby" into his sentences.

Some of the information contained in the film will no doubt come as a revelation even to contemporaries who remember the event clearly. Such as the IPD police chief carrying a handkerchief in his pocket during the press conference -- his signal to take Kiritsis out, even if it meant having Hall's brains blown out on live national television. Or that Kiritsis had pulled a similar stunt years before, holding his sister hostage for 2½ days in a family dispute over money.

We hear Fred Heckman, the respected news director of WIBC radio, regretting his role as Tony's principle mouthpiece over the airwaves. We get to listen to their conversations, both on the air and those recorded surreptitiously, as the "Walter Cronkite" of the Indianapolis airwaves attempted to keep Kiritsis calm and pliable.

One aspect that especially struck me was how the men were literally bound together the whole time. Because of their positions, Hall never got to see Kiritsis during the public standoff, except perhaps out of the corner of his eye. The whole time the cameras were rolling, he had to listen to the rantings of the man who repeatedly vowed to kill him if necessary, without being able to gaze into his eyes and judge the merit of those threats.

In this sense, Hall's dull, glazed expression makes sense -- he was forced to stand as unseeing witness to his own kidnapping.

The Kiritsis hostage crisis was a huge national story at the time, arriving just at the cusp of the modern information age, when camera crews could bring the news into our homes in seconds, not hours or days.

But it blew over quickly, certainly as the networks lost interest when blood failed to spill. Even some of the veteran local journalists admit it became old news quicker than it should have, with few enterprising inquirers to ask why and how such a scary, silly, sordid affair happened.

We no longer have to.