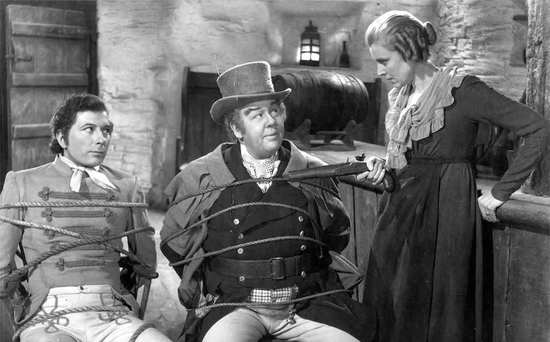 Though it's largely a forgotten film, "Jamaica Inn" is notable for a number of reasons. It was a huge commercial (thought not critical) hit, marking the heyday of star and producer Charles Laughton, who gives a daffy, twinkly performance as an off-kilter nobleman/crime lord.

It was also the first major screen role for Maureen O'Hara, who was discovered by Laughton and signed to an exclusive contract that defined the early part of her career. She'd already made a big splash as a teenage stage star, and they would next go on to star together in "The Hunchback of Notre Dame," making O'Hara an international sensation. She and Laughton enjoyed a convivial father/daughter relationship that lasted until his death in 1962.

The film was the last British production for director Alfred Hitchcock, who chafed under Laughton's lordly yoke, including demands for many retakes and closeups, and departed for Hollywood thereafter.

"Jamaica Inn" essentially marks the last time Hitch worked as a hired gun instead of the shot-caller. He reportedly deplored the final film, and many Hitchcock observers consider it his worst.

It was also the first of three times Hitchcock adapted a novel by Daphne du Maurier, the other two being "Rebecca" and "The Birds," two of his biggest successes. Though du Maurier was reportedly irked by the many changes the movie made to the book, including transforming the villain from a clergyman to a justice of the peace.

(Though that was owing to the British censors, who deemed no man of the cloth could be depicted as evil.)

Despite its low reputation, I largely enjoyed the picture. It's hauntingly beautiful, replete with gorgeous black-and-white compositions by cinematographers Bernard Knowles and Harry Stradling, including lots of slanted light and shadows that shows the influence of German Expressionism.

What to say of Laughton's performance as Sir Humphrey Pengallan? It's like a ride on a motorcycle lashed to a runaway rocket: you either strap in and go along for the trip, or you don't.

Sir Humphrey is a high-living squire in the remote Cornish coast who's also the local justice of the peace, i.e. something like a cross between an Old West sheriff and judge. What nobody knows is that Sir Humphrey is also running a gang of cutthroats operating out of the titular establishment, who deliberately douse the beacon lights on the ocean cliff to lure merchant ships into crashing, making off with the cargo and murdering all the seamen.

With his mincing walk -- Laughton played waltzes in his head to get the flow just right -- juggernaut pomposity and fake caterpillar eyebrows wandering a full two inches above his real ones, Laughton's Sir Humphrey comes across as a psychedelic combination of Baron Harkonnen from "Dune" and Hannibal Lecter's swishier cousin.

Laughton himself reportedly envisioned the role as an extension of his Oscar-winning one from "The Private Life of Henry VIII" a few years earlier. As producer, he was in a position to make that vision real.

Sir Humphrey's house is an immense Versailles-like palace, with lavish banquets and a parade of noble guests. His extravagant outfits are a miracle of rotund ostentatiousness, a cornucopia of shiny buttons, double-breasted vests and dickeys, topped off in later scenes by a leering black tophat.

Sir Humphrey's schemes start to go awry with the arrival of O'Hara's Mary, a young orphan girl just arrived from Ireland. Her aunt, Patience (Marie Ney), lives at the Jamaica Inn with her brutish husband Joss Merlyn (Leslie Banks), the ringleader of the "land pirates" wrecking the ships. He's secretly beholden to Sir Humphrey, who provides information about the richest passing ships from his position and social engagements.

Joss is portrayed as drunken lout, but the utterly devoted Patience has loads of... well, you get it. She sticks to him until the end (which is also her own)

Joss would like to throw Marie out on her head right away, or possibly rape her, but there are other matters to attend to. Marie witnesses Joss and his gang attempt to hang a mouthy new recruit, Jem Trehearne (Robert Newton). She cuts him down and rescues him, and then they're both on the lam.

Turns out Trehearne is really an undercover officer of the court sent to investigate the spate of shipwrecks. He and Marie take refuge at Sir Humphrey's, unaware of his involvement, leading to an inevitable showdown in which Sir Humphrey double-crosses... pretty much everybody.

Growing increasingly kooky, Sir Humphrey tries to make a getaway to France with Mary as his captive and intended sex slave. Things end with him plummeting to his death after a deliberate leap from the topmost rigging of a ship -- the high man finally brought low, aboard the same type of conveyance he targeted to fill his insatiable greed.

The only other cast member who makes any kind of deep impression is Emlyn Williams as Harry the Pedlar, Joss' suspicious number two. Young, thin as a whippet and dressed like a downmarket dandy -- always wearing a cockeyed tophat of his own -- Harry has a terrifying penchant for whistling to let his intended victims know of their fate.

In many ways, he's like a shrunk-down, funhouse mirror reflection of Sir Humphrey.

You'd definitely have to rank "Jamaica Inn" as a minor work in the Hitchcock oeuvre. But it's not nearly as bad many have regarded it, and stands as a waypoint for many important careers.