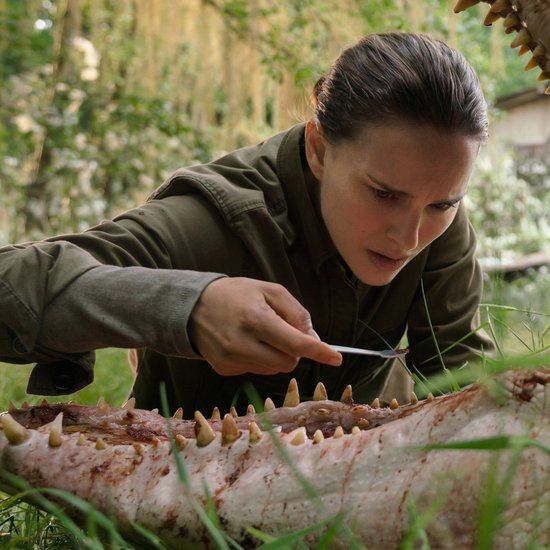 “Annihilation” falls into that section of science fiction that’s more cerebral and contemplative than the rest. Despite the name, the genre can often be pretty dopey in its premises and storytelling.

It’s not the most entertaining film, but like “Contact,” to which it is a thematic cousin, its rewards operate more at the intellectual level than the gut.

Natalie Portman plays Lena, a scientist/soldier who’s chosen by fate and her own instincts to enter the Shimmer, a mysterious, growing sector of forbidding energy that cropped up a few years ago. So far the government has managed to keep it under wraps because it’s in a remote area, but it’s only a matter of time before it starts gobbling up entire cities.

Lena’s husband, Kane (Oscar Isaac), went into the Shimmer a year ago and never came back -- no one ever does. She’d assumed him dead, but when he suddenly pops up out of nowhere, emotionally distant and physically ailing, she’s sucked into the consortium of science and military types reacting to the crisis.

Interestingly, the entire team going in is comprised of women. Jennifer Jason Leigh plays the inscrutable Ventress, a psychiatrist leading the team. Gina Rodriguez is Anya, the group’s brash muscle. Tessa Thompson is Josie, a brilliant wallflower. And Tuva Novotny is Cass, the only one who makes an attempt to befriend Lena.

Obviously I don’t want to give away too much about what they find in the Shimmer, but suffice it to say some kind of alien force is messing around with the DNA of every living thing inside, turning it into a hothouse of toothsome horrors and gorgeous delights.

Written and directed by Alex Garland (“Ex Machina”) based on the novel by Jeff VanderMeer, “Annihilation” got a very mixed reaction from critics and audiences. It’s an engaging blend of horror, sci-fi and thriller elements, with a little bit of philosophical musings thrown in.

Bonus features are interesting, and organized unlike others I’ve seen. (You’ll need to spring for the Blu-ray version to get them, as the DVD contains zippo.)

The extras are organized into three parts, based on the journey the women take over the course of the movie. Each part contains a documentary short about an aspect of production, along with interviews with cast and crew reflecting on that topic.

“Southern Reach” looks at the concept of the story and translating it into film. “Area X” is about the transformation of live sets into the fantastical world. “To the Lighthouse” examines the visual effects and how they’re incorporated into the storytelling.