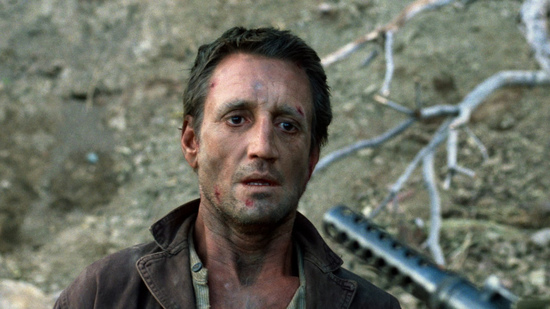 "Sorcerer" sure is an odd duck of a movie. The best thing you can say about it is it's not like anything else.

The title implies some sort of fantasy/science fiction element, of which there is none. It's based on a 1950 French novel by Georges Arnaud, "The Wages of Fear," and was made into a well-regarded 1953 French-Italian movie of the same name (unseen by me). The story is four desperate men driving trucks loaded with volatile dynamite through the South American jungle, so the movie is closer thematically to "Convoy" than "Wizards," both roughly contemporaneous films.

It's the personal project director William Friedkin chose to make after the runaway successes of "The French Connection" and "The Exorcist," and its soaring costs and box office demise -- buried under the release of "Star Wars" -- more or less ended his career as an A-list director.

The title actually refers to the name given to one of the trucks by the drivers, the other being Lazaro. Friedkin came up with them himself, and in a subsequent interview said it referred to "the evil wizard of fate." It's a pick he came to regret, though it still beats his first choice, "Ballbreaker." More than anything else, the movie's mysterious name helped doom its prospects, as audiences expecting another supernatural thriller in the mold of "The Exorcist" walked out in droves.

Still, Friedkin counts it among his personal favorites. And the moody musical score by Tangerine Dream, their first, launched a decade-long romance between movies and electronic music that I, for one, deeply cherish and that still influences modern film composers like Hans Zimmer. Friedkin personally oversaw a digital restoration of "Sorcerer" released in 2013, and the film is hailed in some critical circles as an overlooked masterpiece.

"Sorcerer" has been compared to "The Treasure of the Sierra Madre" and "Aguirre, the Wrath of God," both films that contemplate the randomness of fate, man's capacity for violence and the way a suffocating environment can seep into their souls.

I can see what Friedkin was aiming for, and certainly appreciated the movie's refusal to sentimentalize its characters or shoehorn them into strict hero/villain categories. Everyone we meet has degrees of nobility and rottenness.

But the stark truth is watching the movie is an often tedious affair, unless you are thrilled by countless close-ups of truck wheels striving against mud, crumbling rock or other terrain while accompanied by the grumbling of engines straining in low gear.

At just a hair over two hours, "Sorcerer" would be much better at a half-hour shorter.

The high point of the film is surely the arduous crossing of a rickety wooden suspension bridge over a swollen river -- a 12-minute sequence that took literally months and millions of dollars to shoot. It really does look like the trucks are teetering at a precarious angle on this ridiculously undersized suspension -- like a rhino trying to balance on a tightrope -- and indeed the vehicles actually reportedly did fall over into the drink several times during production.

The story is quite straightforward, screenplay adaptation by Walon Green, who also penned "The Wild Bunch" and went on to a busy career in television production that continues today. Four international vignettes introduce the men, who each had to leave their home country due to criminal acts. They find themselves stuck in Porvenir, a tiny Latin American village of inexact location, where an American oil company dominates the economy.

When the oil well explodes, the local manager (Ramon Bieri) is given a tight timeline to get the blaze capped and production restarted. The only way to do that is with explosives, and apparently the only dynamite available was stored 200 miles away, rotting away in a jungle shack for a year. Because the nitroglycerine has leaked, any sudden motion would cause it to explode.

So the four best drivers are recruited to make the arduous journey, with a huge payday balanced against the high likelihood of some of them not making it back.

Now, think about that for a minute. Literally the ONLY dynamite readily available is these dripping, exploding sticks o' doom?!? It strains credulity far past the breaking point to believe the oil honchos, who have their own helicopters, couldn't fly somewhere within a few hundred mile radius to buy some other dynamite.

Heck, in the week or so time frame it takes the drivers to build two serviceable trucks out of scrap parts and make the trip there and back, they could have flown in several airplanes filled with virgin dynamite fresh out of the factory. As plot holes go, this one's an ocean maelstrom, sucking the film's believability down to the briny depths.

Speaking of the trucks: they're pretty visually interesting, practically characters unto themselves. They're both based on GMC M211 military trucks from the Korean war area, heavily modified to look distinctive.

Sorcerer has a reddish hood, white teeth-like grill bars with ad-hoc headlights mounted above, which gives it the look of an angry crimson insect. Lazaro, the one piloted by star Roy Scheider, resembles a battered elderly man, and is most notable for having its exhaust pipes routed out under the front bumper, so the old fellow is perpetually smoking.

Scheider's character is Jackie Scanlon, a low-level Irish mob crook whose gang knocks over the collections at a local church, with Jackie's hot-headed partner shooting the priest in the process. Turns out it's the personal church of a rival mafia chief, so Jackie is forced to flee the country. He goes by the name Juan Dominguez down south.

It's not your typical role for Roy Scheider, playing a guy who's rather passive and not particularly outspoken. We're so used to seeing him in charge onscreen, and here's a rather miserable lump of a man.

Bruno Cremer plays Victor Manzon, aka Serrano, a French businessman who embezzled a bunch of money along with his brother-in-law. When his father-in-law refuses to repay the debt and they're threatened with ruin and jail, he runs away while the son kills himself.

The last two members of the team are ever shadier. Nilo (Francisco Rabal) is a Mexican assassin who finds himself low on cash and in need of a way out of Porvenir. Amidou plays Kassem, aka Martinez, a Palestinian terrorist whose cell sets off a bomb in one of the opening vignettes, killing a bunch of innocent Israelis.

The fourth member of the team is actually mean to be Marquez (Karl John), another pseudonym for the German who is obviously an officer of the Third Reich hiding out in South America. Nilo kills him and takes his place, bringing about the enmity of the others -- though he eventually earns his place.

I won't bother detailing the driving portion of the movie, other than it's the expected mix of setbacks, crossed directions and conflict within the group. As you could guess, some of the crew do not make it back alive.

I truly wanted to like "Sorcerer" more than I did. I've been trying to see the film for a couple of years, and finally had to settle for a pan-and-scan DVD that did not do the movie's visuals justice.

There's a glorious, grimy saga somewhere inside this film that, like its ill-conceived name, keeps getting misdirected the wrong way.