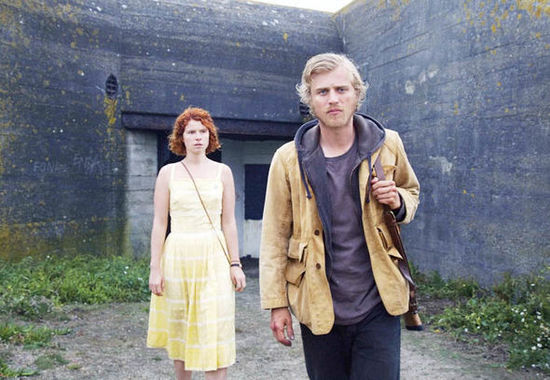 Buckley appeared on one of those "anybody can be a star" TV programs in Great Britain a few years ago, and has since made a name for herself as a singer, stage and TV actress. This is her first starring film role and, if we're lucky, the prelude to many more.

There's a startling immediacy to her screen presence; we don't sense the usual thespian tricks and remove of the craft. Buckley is just there, right in front of us, never hiding.

She plays Moll, the youngest daughter of a well-to-do family living on a picturesque, unnamed British island. When I first glimpsed her, I thought Moll to be a teenager, but that's just how everyone treats her. Geraldine James plays her disciplinarian mother, who views Moll as a mere extension of herself and her household.

Moll's older siblings (Oliver Maltman and Shannon Tarbet) are already married and starting families, so she's expected to stay at home, caring for her dementia-stricken father, and offer endless obedience. She works in the day as a tour bus guide, droning to blue-haired ladies about the island where she's lived her whole life, but which holds no enchantment.

She's upstaged at her own birthday party, and exercises a rare moment of rebellion by sneaking away to a club, dancing until dawn. We sense this may just be the happiest night of Moll's life, until the fellow she's with gets handsy. Luckily Pascal Renouf (Johnny Flynn) shows up to chase him away, wielding the rifle he's been using to poach rabbits.

Problem is, Pascal is far scarier than the fellow he ran off. With his hollow face etched with scars, framed by scruffy pale hair and beard, blue eyes that stare with unnerving clarity, ragged clothes and hands casually stained with blood, Pascal is like a primordial version of man sprung from the sea, a hunter wandering among the prey.

Moll is instantly captivated by him, and they soon begin a torrid affair that causes much frowning. At first it's just because of tired class divisions -- he wears black jeans to a country club dinner! -- but soon there are whisperings about his sordid past.

More disturbingly, a series of murders is plaguing the isle, one dead girl turning up after another. They've all been raped and suffocated, their mouths stuffed with raw earth. Pascal easily becomes the prime suspect, and by extension Moll becomes a target herself for the community's ire.

Clifford (Trystan Gravelle), a police officer who's long harbored a crush for her, tries to warn Moll off, but is rebuffed. More official inquiries soon follow; the lies start to pile up.

Moll, a girl who's been a victim her entire life, is resentful that everyone is pressing down on Pascal, ruining her first -- possibly only? -- chance at love. But part of her can't shake the suspicion the accusations are true.

She even starts to have daydreams about committing unspeakable acts herself. A tidbit from her own past reminds us that sudden, sharp violence is not unknown to her. Moll occasionally plucks random long hairs she discovers growing from her body.

Is Pascal the beast, or she? Or maybe they both are, and he just wears his malevolence more outwardly?

Writer/director Michael Pearce, making his feature film debut, gives us an astonishingly evocative film in which the spoken words carry the least of the information to the audience. Much of the movie is spent just looking at Moll, seeing how awkward and timid she is, then watching her grow -- not always in a positive way -- in the warmth of Pascal's seething glow.

Buckley has an amazingly frank, raw, almost feral beauty. With her one-sided smile and tangle of crimson curls, we know in our hearts Moll was always the bullied girl at school, the one they called ugly who never had a boyfriend. She's internalized that abuse to such an extent it's become an intrinsic part of her shriveled personality.

She is the unwanted, the woman everyone takes for granted. Now someone finally wants her for her, and she throws herself into that desire with frightening abandon.

There's one brief, wonderful scene where Moll has come home after a night out with Pascal. Her hands are filthy, and she sits on the couch, grinding her crusted fingernails into the pristine cushions, leaving tracks of filth. Her face beams with dark satisfaction in this act, the good little girl finally finding the fierce woman inside.

"Beast" is a gorgeous, sensuous, forbidding work of cinema. It's like a warm embrace, and then it starts to squeeze with a killer's strength.