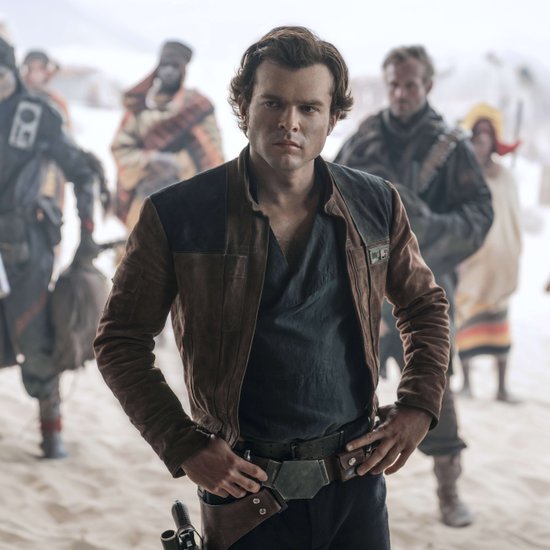 “Solo: A Star Wars Story” is in a lot of ways daring, and in other ways plays it very safe.

It’s the first film in the franchise to cast another actor as one of the principal characters from the first trilogy, and attempt to sketch out a backstory for that universe’s most deliberately vague period: what smuggler/rogue/occasional nerf herder Han Solo was doing in the years before he bumped into Luke and Leia.

By all accounts Harrison Ford -- who seems to be lobbying to kill off all his iconic characters with the exception of Indiana Jones -- is happy to pass along Han’s mantle to Alden Ehrenreich. My guess is most audience members will be fine with it, too. Ehrenreich is cocky, twinkly and likeable.

(Wait until they cast someone besides Carrie Fisher as Leia, and we’ll see how people feel. Btw, I don't count Darth Vader because other actors played Annakin before his fall.)

The result is a film that’s fun and frivolous. There aren’t really a lot of stakes, since we know Han is going to survive, meet up with furry friend Chewbacca (Joonas Suotamo) and acquire the Millennium Falcon in a game of cards with fellow scoundrel Lando Calrissian (a charismatic Donald Glover).

Pretty much any other character who shows up, we can make some good guesses about their fate.

There are two main new ones. Emilia Clarke plays Qi’ra, who grew up with Han on Correllia, a junk planet where runaway kids work for a local crime boss. They are separated while attempting their escape, and Han vows to become a pilot, buy (or otherwise acquire) his own ship and return for her. Instead, he winds up in the trenches as a grunt soldier for the Empire, after being kicked out of their version of pilot school.

The two do eventually meet up again, though circumstances are very much changed. Despite the old passion still burning, they play a cat-and-mouse game with their faith in each other.

The other main addition is Woody Harrelson as Tobias Beckett, an old scallywag who takes Han under his wing. He teaches him how to shoot a blaster with finesse, pull off daring heists and, above all, to trust no one.

Paul Bettany turns up as Dryden Vos, the scarred, sneering boss for the criminal syndicate, Crimson Dawn. The long and short of it: after failing to steal a batch of hyperspace fuel from the Empire, Beckett and Han are tasked with pilfering a load of its unstable raw component from a mining world deep within the dangerous Kessel nebula.

If that name sounds familiar, especially in context with the avowed speed of a certain spaceship, you won’t come away disappointed.

Phoebe Waller-Bridge provides the voice and motion of L3, Lando’s sassy droid/copilot. It’s a very different take on the subservient role robots usually take in the Star Wars universe, with L3 making puns about her supposed “organic overlord,” and encouraging other droids to rise up against their masters.

Director Ron Howard isn’t known as a master of action scenes, and I often found the fights hard to follow. The film also seemed very murky to me, as if they shot it without a lot of foreground lighting, though that may just have been the theater where I saw it.

But Howard, who took over the film from a pair of co-directors several months into production, finds a nice balance between comedy, character development and laser blasts. The screenplay is by Star Wars veteran Lawrence Kasdan -- hey, how come no one’s ever thought to let him direct one of these? -- and his son, Jonathan.

I feel about “Solo: A Star Wars Story” about the same as I did “Rogue One,” “The Force Awakens” and “The Last Jedi.” They’re fun rides, and I like dancing around in this universe as much as anyone. But they don’t hold a candle to the original trilogy, which no one would debate, and aren’t even as good as the second trilogy -- a statement I know will inflame my fellow geeks everywhere.

It’s a peppy rehash, but a rehash it remains.