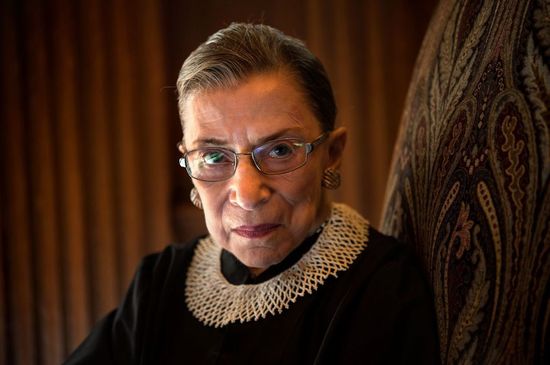 I admit I did not have high hopes for the “RBG.” Documentaries about a public figure, made by people who are admittedly big admirers of their subject, tend to be uncritical and uninteresting. I prefer my documentary films to be exploratory and journalistic; but the favored mode today, especially on political topics, is hard-edged polemics.

So “RBG” is a pleasant surprise. Directed by Julie Cohen and Betsy West, both veterans of the documentary genre, it’s a movie that is clearly in love with its subject, Ruth Bader Ginsburg, the diminutive, soft-spoken woman who has become the lioness of the liberal wing of the Supreme Court. Yet it’s not afraid to poke into the life of a very private person, and ask at least a handful of critical questions.

A pioneer of gender equity law, who argued a half-dozen cases before the SCOTUS (winning five) before being appointed a judge herself, Ginsburg has gained notoriety in recent years. Indeed, she’s become a bona fide pop culture icon, with T-shirts, memorabilia and even tattoos heralding her as “The Notorious R.G.B.,” a play on the pseudonym of rapper Biggie Smalls.

The portrait that emerges from the film is at once intimate but also iconographic. Ginsburg goes by a number of other nicknames: Kiki to her childhood friends, Tata to her grandkids, the Great Dissenter to those on the left who relish her increasingly frequent dissents in sharply divided court cases, which Ginsburg has taken to reading in person from the bench to register her disapproval.

She’s an outwardly simple yet inwardly complex figure, someone who has literally lived for her work, loving the law so much that, even at age 84, she often works until the wee hours of the morning, being forced to relent for meals or sleep. Retiring, even shy, raised by Russian immigrants who believed nice women do not raise their voices, Ginsburg is nonetheless softly brilliant and self-possessed.

For example, she is clearly tickled by all the public attention she’s been getting in recent years, making plenty of public appearances, taking photos with fans and even appearing in several of her beloved operas. She’s become an aspirational figure for young people, despite being very old-fashioned herself, barely partaking in pop culture.

In several instances, the filmmakers show Ginsburg some of the stuff about her, which she’s obviously seeing for the very first time, and film her reaction. She bubbles with laughter at Kate McKinnon’s parody/homage of her on “Saturday Night Live.”

With her signature giant glasses, prim judge’s robes accented with feminine collars and slightly stooped frame, her chin perpetually drooping toward her chest, Ginsburg seems like a wizened, wise old bird who has something to say.

In addition to generous interviews with Ginsburg herself, the film also uses archival footage, quotations from her voluminous writings and interviews with friends, colleagues, family members and admirers to draw from. We touch upon her key court cases as a lawyer and then as a justice.

Ginsburg believes that the deepest and most enduring change happens gradually, and her legal career has been “like knitting a sweater” of progressive legal thought, according to a colleague.

I was ravished by the half-century romance between Ginsburg and her husband, Martin, an accomplished lawyer himself who willingly set aside his own career to support his wife. Funny and outgoing to Ruth’s social reticence, theirs was an unmatched match.

“RBG” also looks at some parts of her life that are less flattering, or at least confusing to her admirers. Chief among these was her deep, genuine friendship with Antonin Scalia, the late justice who represented the court’s conservative wing as passionately as she does the leftward side. Both were known for employing acid pens in their court opinions, but also for warm hearts.

Other topics touched on are Ginsburg’s injudicious comments about then-candidate Donald Trump during the 2016 election, which shocked and disappointed even her admirers. And there’s that time she slumped asleep during President Obama’s State of the Union address. Event today, she seems a mite embarrassed.

You don’t have to agree with Ginsburg’s legal opinions to recognize that she’s a great American. I went into “RGB” expecting hollow flattery, and came out wowed by the woman, and the documentary that explores a quietly extraordinary life.