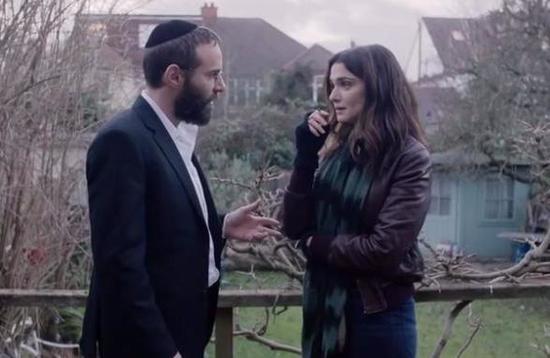 “Disobedience” has a storyline that seems, at first, to be very familiar: prodigal child returns to the fold of the cloistered community they grew up in, and subsequently fled in disgrace, to find that things have not changed so very much. In this case, it’s Rachel Weisz as Ronit, who was raised in a strict Orthodox Jewish enclave in London, the only child of the revered Rav (Anton Lesser), the rabbinical leader of their kind.

Now a successful photographer, Ronit is coming home after years away -- I’m guessing around 20 -- because of the death of her father. In a powerful opening sequence, he crumples to the floor of the synagogue while delivering a passionate lesson on free will.

Her reappearance is greeted with something between tolerance and disdain. From the moment she locks eyes with Dovid (Alessandro Nivola), a youngish rabbi, we know there is great history between them. We start to read things into the story: they had a torrid affair, which perhaps caused the schism with her father, who was Dovid’s teacher and he the old man’s star pupil.

Ronit is somewhat shocked to learn that Dovid has married her childhood best friend, Esti (Rachel McAdams). But they seem happy, or at least content, and after agreeing to stay in their house, Ronit learns to accept the situation for what it is. Or at least what we think it is.

It’s another knockout performance by Weisz, who’s been wowing in smaller films for several years now. She might just have the best claim to the title of finest actress working movies today.

In virtually every scene we feel her tension, her resentment, knowing that she is constantly being looked at, spoken about, judged. It’s apparent Ronit was never formally shunned, but clearly everyone views her as the black sheep. She’s crushed when the Rav’s obituary lists him as childless.

Based upon the novel by Naomi Alderman, “Disobedience” was directed by Sebastián Lelio, who also co-wrote the screenplay with Rebecca Lenkiewicz. Like Lelio’s previous effort, the Oscar-winning “A Fantastic Woman,” this is the tale of a woman who has been relegated as an outsider, resenting this status but also thirsting to be accepted for who she is.

It’s a quietly observant movie that soaks us in the culture of strict British Judaism. For instance, Ronit’s uncle (Allan Corduner) makes his business in women’s wigs. Married women in their sect traditionally cover their hair like Muslims, though they use wigs rather than scarves. The idea is that only her husband is allowed to see her natural hair -- a form of intimacy that ventures disturbingly close to subjugation.

McAdams is very good, too, in an emotionally complex role in which Esti experiences as much turmoil as Ronit, and more intensely so.

I was also impressed in Dovid’s portrayal. Most movies of this sort would be eager to pigeonhole him as the villain, and indeed he does not react well upon realizing what is going on underneath his own roof. Dovid is in line to succeed the Rav, so he must face a crisis of conscious of his own as a husband, a spiritual leader and a man living in a patriarchal society that demands he keep his “house in good order.”

Every one of us faces a point in life where we must decide if we are to live according to other’s expectations for us, or our own. “Disobedience” is a fine, insightful film that shows how this choice not so easy or conclusive as we might think.