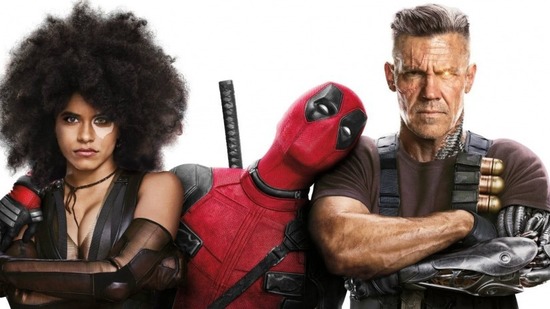 The first “Deadpool” was the naughty, foul-mouthed cousin of the Marvel Comic Universe -- sharing much DNA but separated by sensibilities and different studios. One of the running jokes of the lively sequel is that they can’t afford any of the “expensive” other heroes to share the screen as they did in the latest “Avengers” flick… though they manage to sneak in some cameos.

Once again, unkillable killer Wade Wilson (Ryan Reynolds), aka Deadpool, visits the mansion of the X-Men school, only to find the same two downmarket mutants around: the steely Colossus (voice of Stefan Kapičić) and the firecracker teen Negasonic. Though there’s a quick peek at some of the other X-folk hiding out in an antechamber.

It’s another slapdash, freewheeling train of one-liners and ultra-violence, with Deadpool as our merry ringmaster. If you’ll remember from the last movie, Wilson was a special forces soldier turned mercenary who was experimented upon nastily, rendering him a scarred monster who can nonetheless heal virtually any wound.

Without giving anything away, Deadpool finds himself in need of a new purpose in life, and latches onto a 14-year-old mutant from New Zealand, Russell (Julian Dennison), who dubs himself Fire Fist. (He likes the kid too much to tell him how awful the moniker is.) He’s a troubled youngster heading down a dark path.

Around this same time, a strange cyborg dude from the future, Cable (Josh Brolin, playing his second super-baddie this month), pops up to take out Russell for some crimes his adult self committed. He’s got a metal arm, robotic eagle eye and a surly attitude. It becomes a running battle, with Cable wielding a variety of futuristic weapons and Deadpool his ability to take a punch and give a quip.

When things don’t work out with joining the X-Men, he even decides to start his own super-team, naming it X-Force for reasons of gender equality, and because he couldn’t think of anything more original. It’s a gangly crew of low-level mutants and one extraterrestrial, although Domino (Zazie Beetz), a churlish lass who claims her power is “good luck,” seems like a keeper.

The film is directed by David Leitch, a veteran stunt coordinator who made the leap behind the camera with “Atomic Blonde,” which for my money was even better than the similar “John Wick” flicks. The screenplay is a return of the same trio, Simon Kinberg, Lauren Shuler Donner and Reynolds himself.

The sequel has a few dead spots around the middle, though it’s still an insanely smart, fast-paced merry-go-round of fun and f-words. Deadpool again repeatedly breaks the fourth wall, commenting upon the movie as it unspools.

For instance, one background player from the last movie gets a brief, nervous speech, and Deadpool immediately declares, “No more speaking lines for you!”

Or, when Cable delivers another gravelly bit of doom dialogue: “You seem very dark. Are you sure you’re not from the DC Universe?” Before Colossus is about to go toe-to-toe with a very large, cult favorite villain, Deadpool announces “the big CGI fight.”

Make sure to stick around for the end credits, where Deadpool makes some unexpected appearances in related superhero venues, including one hilarious reprisal, which I’ll not spoil. “Just cleaning up the timelines,” he offers.

It’s not quite as funny or filthy as its predecessor. But “Deadpool 2” still has a gleeful sense of shamelessness to it that, at least in this little corner of the superhero genre, fits like leather spandex.