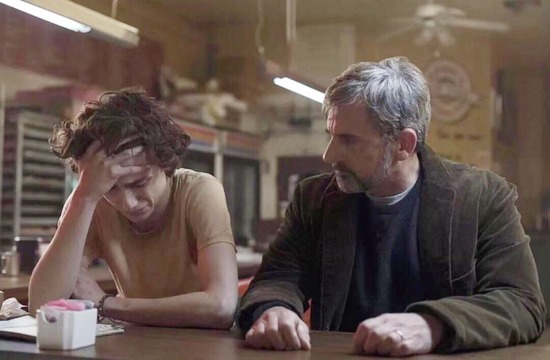 “Beautiful Boy” delivers everything I expected, and nothing I didn’t.

It’s a well-acted, well-intentioned drama about drug addiction and the horrid toll it takes on a family. The film is based on a true story, and interestingly the father and son each wrote memoirs about their journey that formed the basis of the screenplay by Luke Davies and Felix Van Groeningen, with the latter also directing.

This should be the sort of film that milks you for tears, yet I found it oddly emotionally remote. I observed the characters rather than getting caught up in their plight. Instead of pitying them or identifying with them, I regarded them as mere constructs in a tale that felt like it was navigating a predetermined path.

In many ways, the worst thing a movie can do is fail to surprise you.

Steve Carell plays David Sheff, and Timothée Chalamet is his teenage son, Nic. They have a strong, tender bond that’s survived divorce (Amy Ryan is the brittle ex-wife/mother) and remarriage to Karen (Maura Tierney). Their special thing is when parting to simply say “everything” to each other -- as in, I love you more than everything.

Like too many kids his age, Nic dabbles with pot and booze. David brushes it off; he did the same thing at that age. (And still dabbles, he admits.) But when he tries crystal meth, it’s like Nic’s whole soul is sucked into a hole. A quizzical, creative boy who loves to write and draw, part of the problem is that he feels more alive and vibrant when he’s on drugs.

In one pivotal scene, David goes through his son’s notebooks while he’s off on one of his multiple-day benders, and finds an entry where he says that his life felt like black-and-white until he tried meth, and then it became Technicolor.

David is a journalist who enjoys his secure, well-ordered life. Carell shows us how he deeply cares for and loves his son, but also how Nic’s addiction throws a wrench into the life he’s carefully rebuilt with Karen, which includes two adorable blonde moppets. Every conversation he has with his ex-wife about Nic’s welfare immediately turns into a shouting match, more about stirring up old resentments than protecting their kid.

(The movie has a decided “House Hunter” problem common in films today: the Sheffs live on an idyllic tree-lined estate on the outskirts of San Francisco, despite the fact he is a freelance writer and all Karen seems to do is paint pictures.)

The story goes through a predictable cycle of critical drug use, rehab and relapse, with Nic showing up in progressively worse and worse shape. Chalamet transforms from skinny to scrawny, his cheeks sunken and his ribs showing through T-shirts draped over his shriveled body.

I appreciated some of these sequences. In one, David waits in a favorite restaurant to be reunited with Nic, and wistfully recalls their conversations and good times there when his son was just a tyke. Then the devastated man-child shows up, twitchy and resentful, going through the motions of rekindling the relationship until he can demand money. The contrast is jarring.

But in the end, “Beautiful Boy” has a rote, TV-movie-of-the-week feel to it. Nothing ever happens that we didn’t anticipate. The film checks all the right boxes, but fails to absorb our hearts.