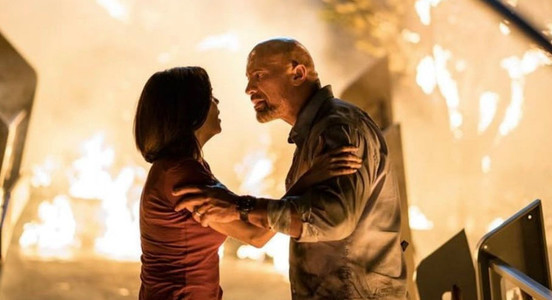 Then he turns around and actually tackles a more complex part, playing a disabled ex-military guy with PTSD and a lot of self-doubt. And the movie bombs, at least at the domestic box office.

This is why no one should take career advice from movie critics.

Johnson plays Will Sawyer, an Army/FBI team leader who switched to designing security systems after an op went bad, leaving him with a prosthetic leg and a lot of regret. His buddy Ben (Pablo Schreiber) hooks him up to do the security work on The Pearl, a next-gen building in Hong Kong that will be the tallest in the world.

While they’re doing the final run-through some very “Die Hard”-esque international bad guys show up and start blasting the place apart with bullets and explosions. Will has brought along his family (Neve Campbell, McKenna Roberts and Noah Cottrell) for the trip, so of course they’re caught up in the peril.

The movie itself is a pretty straight-forward action/thriller, with plenty of fight scenes and CGI action. It’s nice to see Johnson -- or anyone, for that matter -- playing a hero who’s not automatically the most physically capable person in a room. And he even refrains from the usual quips, eye rolls and bicep-flexing that has become his M.O.

It’s not a great movie, and you kind of have to tuck your sense of logic aside at points. But “Skyscraper” is a genuinely entertaining FLICK with Dwayne Johnson showing a little ambition as an actor.

Bonus features are decent, cemented by a feature-length commentary track by director Rawson Marshall Thurber, who also worked with Johnson on “Central Intelligence.” Pity the actor didn’t join the director for this track. Thurber also provides commentary on a number of deleted or extended scenes.

There are also six making-of documentary shorts that focus on different aspects of production. The most interesting is a talk with Jeff Glasbrenner, the real-life amputee and motivational speaker who inspired the character of Will.