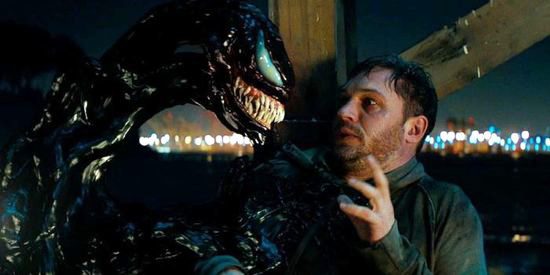 "Venom" is pretty goofy and kind of a garbage movie. But it's the sort of thing that's fitfully entertaining, enough so that you tend to forgive the goofiness and garbageness.

Tom Hardy graduates from playing a Batman villain to a Marvel one, although in this telling he falls more into the anti-hero groove. You may remember from "Spider-Man 3" -- unless you've purged the entire thing from memory, which isn't a bad idea -- that Eddie Brock was a rival to Peter Parker's at the Daily Bugle who eventually become infected with the same alien symbiote that lent him his cool new black suit and darker powers.

This presumably takes place in some alternate timeline, where Eddie never became Venom but instead was chased out of the New York media scene for veiled indiscretions. He landed in San Francisco and has done well for himself, operating as a mobile investigative reporter for a local network doing "The Eddie Brock Report." He's got a cool townhouse, a nifty motorcycle and even niftier fiancee (Michelle Williams).

Things come a-tumblin' down when he goes after an Elon Musk-like tech billionaire whose space program brought back the alien creatures, which resemble twitching balls of tarry goo, and is experimenting with bonding them to mammal hosts, soon upgraded to human guinea pigs.

Eddie loses his job, his home, his girl and his reputation. Oddly, although his clothes and hair get scragglier, he never seems to run short on cash, generously handing a $20 bill to a homeless woman. And he's able to keep his bike and park it in a dingy alley without ever having to worry about it being stolen.

The villain is played by Pakistani actor Riz Ahmed, and I thought it was cool that we're at a place culturally and cinematically where we're comfortable with a brown bad guy. Though for some reason the movie grants him the overpoweringly WASP-y name of Carlton Drake.

One of the alien symbiotes attaches itself to Eddie, turning him into a monstrous figure that resembles Spider-Man dipped in boiling pitch, with a nasty sexualized tongue constantly wagging. He gains superhuman strength and agility, and the symbiote can create spikes or other shapes with its tentacle-like appendages.

Hilariously, the creature also speaks to him, using the same rough, growly Batman voice that has become de rigueur for darker comics characters. It can control Eddie's body and actions, though he remains conscious the entire time, even when Venom wants to (and does) chomp on people.

At one point Venom looks at a gang of mercenaries they have just defeated, and suggests he bite off their heads and arrange the pieces, just for the aesthetic pleasure of it. "Pile of bodies, pile of heads!" it demands.

There are some decent action scenes, though the CGI often becomes bewildering and hard to follow. Hardy plays Eddie as another one of his mush-mouth twerp characters, more Ratso Rizzo than Peter Parker.

"Venom" starts out a little scary and eventually turns into a weird buddy cop comedy, except one of them's a voracious alien creature and neither one of them is a cop.

Posted by Christopher Lloyd at 9:24 AM