Video review: "Sorry to Bother You" 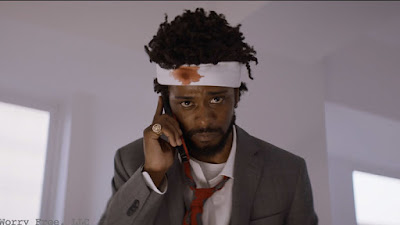 I wouldn’t be shocked if you missed “Sorry to Bother You” in theaters. It’s a tiny picture, although it made a decent media splash at the time of its release. Its star, Lakeith Stanfield, is one of the best young actors working in film today, so it had already been on my radar.

In a dystopian not-so-distant future, Cassius Green (Stanfield) lands a job as a telemarketer for a huge multinational corporation. He’s not very good at it until a fellow black employee (Danny Glover) clues him to use his “white voice” when on the phone. Cassius does -- with the voice dubbed in by David Cross -- and immediately realizes incredible success.

Before long he finds himself the right-hand man of CEO/villain Steve Lift (Armie Hammer), moving into a posh downtown condo and driving some cool wheels. His girlfriend, Detroit (Tessa Thompson), worries about him selling out to the man.

Things get stranger with the revelation of some crazy half-human, half-horse creatures that the company is secretly developing as cheap labor. But I’ll leave that as a surprise.

By turns hilarious, angry, prescient and irritating, “Sorry to Bother You” is one of the most unique cinematic experiences you’ll have this year. I can’t guarantee you’ll love it, but there’s nothing else like it to compare.

Video extras are pretty expansive. They include a feature length commentary track by Riley, who also hosts a “Beautiful Clutter” featurette. There’s a gallery of photos from production, and two making-of documentary shorts: “The Art of the White Voice” and “The Cast of Sorry to Bother You.”