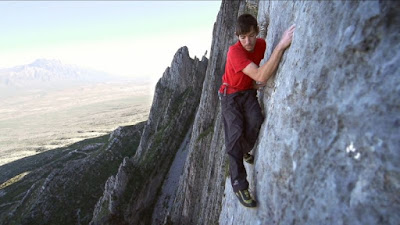 
The basic problem with the movie is that it wouldn’t exist if he had died.

“Free Solo” is a documentary from National Geographic about Alex Honnold, the first person to climb the El Capitan mountain in Yosemite National Park without ropes or other equipment. In the cloistered world of mountain climbing, this was considered a watershed achievement on the order of summiting Mt. Everest.

To the indifferent observer, it seems very much like a self-centered man risking his life for no good reason at all.

The very best documentary films do more than just show you things. They take you away from your own life and perspective, forcing you to discover people who are very different from you in how they think and what they do. By the end, you find yourself, if not embracing the difference, at least understanding and accepting it.

“Free Solo” is not that kind of movie. I went into it believing that mountain climbing is an utterly useless endeavor undertaken by thrill-seeking people who don’t have much else going on in their lives to recommend. I finished it thinking exactly the same thing.

Perhaps that’s my failing, but I think it’s the movie’s.

Honnold isn’t a particular likable, or even compelling, subject for a feature-length film. A rangy man-child in his 30s with large eyes and monkey-like feet and hands, he lives in a van and tools around from mountain to mountain, practicing for his historic ascent. He eats his meals out of the same frying pan he cooked in, using the spatula as an outsized spoon. His only acquaintances are other climbers with whom he trades notes.

At some point during filmmaking he acquires a girlfriend, a vibrant woman named Sanni McCandless with the patience of Job, who follows him around for a time. He suffers a pair of injuries while doing some light climbing with her, and blames her for setting back his plans.

“I will always choose climbing over a lady,” he tells the camera. I have no doubts. He’s become fairly rich and famous, appearing on the cover of numerous magazines, but has eschewed purchasing a home. It’s the same emotionally: Honnold is a renter, not a buyer.

There’s a lot of beautiful photographer in “Free Solo,” as directors Elizabeth Chai Vasarhelyi and Jimmy Chin and their crew of danger-defying cameramen (they’re all men) climb the mountain to capture Honnold’s attempt. But as I say, there really isn’t much suspense involved. The crew frets constantly about having Honnold fall to his death while they’re shooting him, but we know this won’t happen.

Honnold and his ilk like to portray themselves as the inheritors of the mantle of Sir Edmund Hillary and Magellan: fearless folks pushing the limits of their humanity in order to be the the first.

There’s a big difference between exploration and recreation, though. One is undertaken to expand mankind’s knowledge, and the other to enhance a person’s reputation.

Alex Honnold climbing El Cap without any ropes -- spoiler alert! -- successfully adds nothing of value to the universe. “Free Solo” chronicles a meaningless march up a mountain, without managing to illuminate why he, or anyone, would do so.