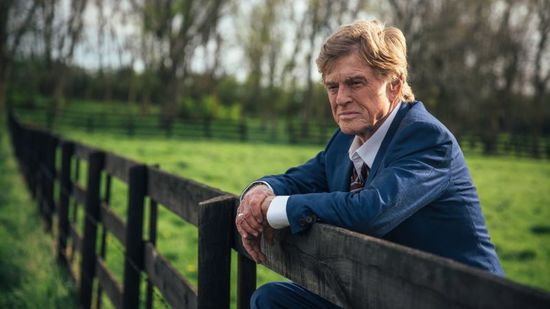 There’s a moment in “The Old Man & the Gun” where Robert Redford appears suddenly in a doorway backlit by a sunrise, and I swear it could have been from the 1970s. The ol’ California blond still has that ineluctable twinkle that just makes you grin.

His character, Forrest Tucker, is known for his smile. He’s a well-aged bank robber who’s always charming and polite to those he steals from. He barely even bothers with a disguise, just donning a fake mustache. He even wears the same blue suit and brown fedora hat when he’s tooling around on his non-robbing days.

Granted, those aren’t a lot: this is a man born to steal.

This film, written and directed by David Lowery (“A Ghost Story”), is based on the true-life story of Tucker, a man who spent most of his life in prison for his various crimes. The movie looks at the period in the early 1980s when he and a couple of confederates (Danny Glover and Tom Waits) knocked over banks all over the country, becoming a media sensation as “The Over the Hill Gang.”

He also robs banks solo when he’s not part of the gang. His M.O. is simple as can be: show the bank teller or manager the gun, order them to fill a briefcase with money, tip your hat and walk out the door, calm as can be. Robberies often occurred without anyone else in the bank even knowing it was happening.

That’s what happens to John Hunt (Casey Affleck), a Dallas police detective who was starting a bank account for his son when Forrest robs the place. He’s miffed that it happened right under his nose. The case becomes a personal obsession for him. He hunts up clues from other law enforcement agencies, and is the first one to put together that all the robberies are related.

If you think this is another tense cinematic cat-and-mouse game where the criminal taunts the cop on his tail, you’d be only half right. The movie isn’t really about the hunt, but both men’s need for the hunt.

John has just turned 40 and is contemplating giving up police work because he’s tired of never fixing anything. The deep stack of cash in Forrest’s floorboard cache proclaims that he doesn’t really need the money. What they both need is a purpose, and for a time that’s squaring off with each other.

The film actually spends relatively little time with the usual procedural stuff: hunting up clues, a near miss, taunts traded through the appropriate communication vehicle of the day. When Forrest sees a TV news segment featuring John chasing him, he inscribes a $100 bill to him at their next heist.

Forrest is wooing Jewel (a glowing Sissy Spacek), a lonely farmer/widow he happens across after one of his jobs. He tells her he’s a traveling salesman, but then he tells her he’s actually a bank robber, and finally he says he was just pulling her leg.

That’s how it is with Forrest Tucker: you may not get the truth, but you will always get the authentic man.

There’s been some talk that Redford has declared “The Old Man & the Gun” his final film, though he’s pulled back from that since. If it turns out to be true, it would be a fitting coda to one of the finest careers Hollywood’s ever seen. It won’t stand among his most memorable films -- of which there are too many to name -- but it left this critic smiling wide.