Review: "A Star Is Born" 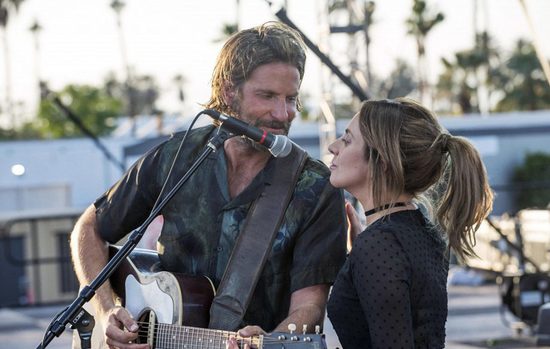 What’s it like to become famous? “A Star Is Born” provides as close an approximation as us peasants are ever apt to experience.

It’s a story of being a nobody and feeling all alone and ignored, and then suddenly there are people all around you constantly telling you what you should do and strangers acting as if they know you.

Lady Gaga, arguably the most famous singer in the world -- if it’s not her, then it’s Beyonce, who was originally in talks for this role -- plays a regular girl, Ally, who goes from crooning in a dive drag bar to the biggest stage in the world.

As with the three previous film versions of this story, the young star is helped along through their romance with an older big star, who eventually sees theirs become eclipsed and grows resentful. I’ve only ever seen the 1937 original and not the musical versions starring Judy Garland and Barbara Streisand from the 1950s and ‘70s, respectively.

Here Gaga’s co-star is Bradley Cooper, who also jumps into the director’s chair for the first time, as well as co-writing the script with Eric Roth and Will Fetters. I’m sure it will be Gaga who gets most of the attention, in a big showy performance that meshes well with her massive star persona. She wrote or co-wrote many of the songs in the movie, and at least a handful are showstoppers.

But it’s Cooper who grabbed my heart in a stricken performance as Jackson Maine, a boozy rocker/cowboy who everybody sees as the golden boy but really feels like a star-crossed loser in his heart. It’s as fine and sensitive performance as he’s ever given, and should be remembered during the awards season.

Cooper also proves to be a more than passable singer, belting out hard-edged rock tunes with a country tinge, as well playing the guitar (or miming doing so) quite believably.

He drops his voice into the basement, chewing his dialogue in a rich, deep burr that immediately made me think of Sam Elliott, which makes sense since he plays Jackson’s much older half-brother.

They used to sing together, but Bobby has now become the tour manager-slash-troubleshooter. Resentments abound -- about the music, the sweaty state fairs where they play, the hearing loss that secretly plagues Jackson. (I identified with him, trying to play it cool while having to ask people to repeat themselves.)

When Jackson stops off in a bar for a drink after one of his shows, he’s ensorcelled by Ally, belting out a saucy version of “La Vie En Rose” while handing out flowers. They spend a magical night drinking, talking, flirting and singing. Next thing she knows Ally has been flown in by jet for his next concert, invited on stage and made to sing one of her songs -- which no one’s heard before -- to a crowd of thousands.

The story is pretty languid and magical the first half, as her star blooms. The second half of the movie flies by very quickly as Ally goes from featured singer in Jackson’s band to a pop sensation all on her own, assisted by Rez (Rafi Gabron), a brilliant but mercenary manager.

This is the rare movie that, even at 135 minutes, could have stood to be a little longer.

The electricity between Gaga and Cooper is undeniable. It’s also fascinating to watch their relationship morph. In the beginning he’s clearly in charge, enjoying granting her a moment in the sun. Later, as his boozing outstrips his talent, Ally becomes the caretaker.

In one memorable scene, they cuddle on a balcony overlooking a massive billboard of her face just before her first album hits. He whispers in her ear to stay true to herself as an artist, not to lose herself in the hype the way he did.

It’s easy to look at all the drinking, drugs and partying and wonder why so many famous people throw their talents away. “A Star Is Born” invites inside the rarest of bubbles and helps us grasp the intense pressure that comes with having to perform. The biggest names often hide the most vulnerable souls.