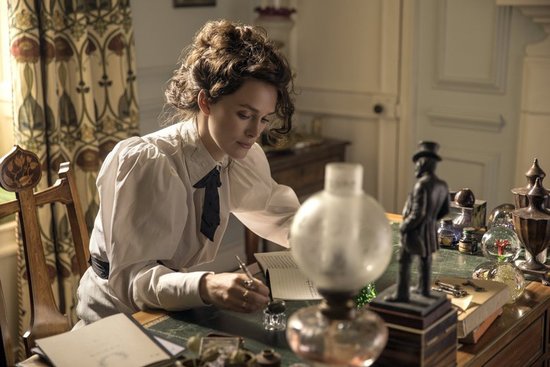 At first blush “Colette” sounds like a retread of the recent wonderful film “The Wife” starring Glenn Close as the wife of a Nobel-winning author who (spoiler alert) actually wrote all of his books.

But in fact “Colette” is more or less the original tale of a long-suffering woman creating great art under her husband’s name, and is based on the historical early life of arguably France’s most celebrated female writer.

It may seem shocking to us that writing could be published under another person’s name, but as the film makes clear, it was common practice in the late 1800s and early 1900s. (And, as I can personally attest, it still is.)

Willy was a publisher himself who kept a stable of writers working feverishly to crank out stuff under the Willy brand -- generally salacious romances for high-society types. When their finances grow slim and he cannot afford to pay his ghost writers, Willy suggests that Gabrielle dash something off.

Her novel, “Claudine at School,” becomes an overnight sensation, detailing the lascivious thoughts and practices of a 15-year-old schoolgirl from provincial Burgundy. More books followed, chronicling the character’s rise to the Parisian salons and increasingly volatile romances. Willy and Colette become the toast of Paris, until the inevitable resentment over his assuming authorship of the books comes to loggerheads.

West is blowsy and self-pitying as the libertine Willy, suit vests barely able to contain an ample belly, a gray squiggle of goatee dancing off the end of his chin. He’s like a well-meaning but incorrigible walrus who always promises not to steal all the fish, but gives in to his appetites every time.

For him, this means basking in the attention of the French literary world, as well as the attendant feminine attention for a purveyor of socially acceptable smut.

At first decimated by his cheating, Gabrielle soon finds herself indulging her own romantic interests with other women -- with Willy’s blessing and urging. An early affair with a wealthy American socialite (Eleanor Tomlinson) becomes a public sensation, as both Gabrielle and Willy trade turns under her sheets. This provides more fodder for the next novel, of course.

This is where the movie is at its best, exploring how a provincial girl morphs into a worldly woman testing the boundaries of social constraint. Knightley -- who seems not to have aged a line since breaking out 15 years ago -- lets us feel Gabrielle’s surging passions and how they translated into art.

She and Willy enjoy a love/hate relationship, not exactly abusive but certainly controlling. He actually locks her in a room and forces her to write. As time goes on, she casts off more of his yoke, particularly via her long-term relationship with Mathilde de Morny (Denise Gough), a renowned noblewoman who dressed in suits and essentially lived as a man.

It’s almost as if Gabrielle dreamed up a parallel universe of affairs and scandal at Willy’s suggestion, and then they were determined to live out this shared fantasy.

The latter third of “Colette” loses a lot of narrative steam, eventually devolving into what seems like a series of naughty vignettes with little connective tissue between them. New lovers come and go like a theatrical parade.

Gabrielle’s marriage to Willy essentially dissolved over the course of some years, the rights to the Claudine books were sold off and she lived at a near-poverty level, subsisting as a stage actress. Her greatest works -- under her own byline -- came later, including “Gigi,” which had its own cinematic adaptation.

Director Wash Westmoreland (“Still Alice”), who wrote the screenplay with Rebecca Lenkiewicz and Richard Glatzer, struggles (as many filmmakers do) with folding the messy, chaotic ends of a real life into a 1¾-hour movie. The result is an engaging biopic that loses steam.

By the way, I promise you I wrote this review myself, and did not force my wife to do it. Although who knows? Maybe she could’ve done a better job.