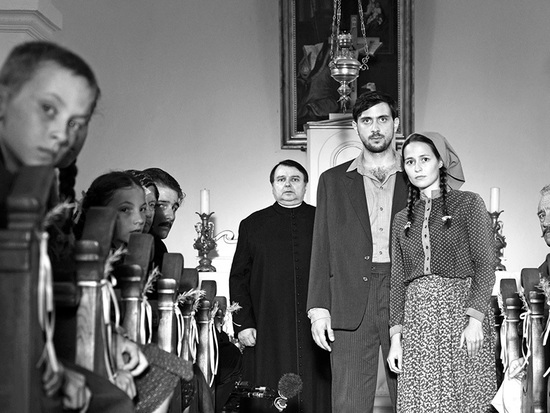 "1945" has an almost Hitchcockian feel, even though it's a historical drama rather than the mystery/thriller sphere that was Hitch's domain. It uses potboiler plot devices to build tension among a group of people, pushing them to do extreme things in duress.

This Hungarian film from director Ferenc Török, who co-wrote the script with  Gábor T. Szántó, is set in a tiny unnamed village in August 1945, after VE day but before the surrender of Japan. Two men dressed in black get off the morning train, bearing two large cases full of perfume and other ladies' cosmetics, according to the bill of ladling. They hire a pair of local men with a cart to carry the trunks into town an hour away, but refuse to ride, walking stoically behind on an unknown mission.

For this, they are rewarded with a frenzy of activity that eventually builds to near panic. You see, the men are Jewish, though their names and faces are unknown in these parts. All of the Jews were rounded up by the Nazi regime and taken away... and apparently not without some assistance from the townsfolk.

A reckoning is at hand, one the villagers fear with the sort of urgency that only comes from certain shame.

Török cuts back and forth between the men on their journey and the building reaction in town, and the story plays out more or less in real time. The Jews are an old man and a young one, possibly father and son (played by Iván Angelusz and Marcell Nagy). They barely speak, but their hard stares tell of an important purpose. (Which I'll not reveal here.)

Meanwhile, the villagers act as if they were expecting something like this all along. The news is conveyed mostly by saying some variation on, "They're here," and everyone is to understand what that means. A hand sketching a hooked nose is the fallback for those in need of more explicit, vile meaning.

Apparently Jewish property was seized during the war, and the newly endowed are worried about losing what they have. The thought of the visitors perhaps representing the first wave of returned survivors -- their former neighbors, business partners and friends -- inspires no joy, only fear and guilt.

Péter Rudolf plays István, the town clerk and owner of a prosperous drugstore, a man who likes to throw his weight around and order everyone about in a benevolent but firm way. If this were an Italian film or one inspired by that region like "The Godfather," we would call István a pezzonovante, a self-decalred big shot. His entire head shaved except for mustache, wearing a full black suit even in the summer heat, he's best described as a petty tyrant.

His son, Arpad (Bence Tasnádi), is to be married this very afternoon, to a pleasant but socially inferior girl, Rozsi (Dóra Sztarenki). István puts on a happy face, stopping by the bride's house to share toasts with her parents, but he's not thrilled about the marriage.

His first business of the day is to visit the farm of Jancsi (Tamás Szabó Kimmel), a local Communist sympathizer, to deliver veiled warnings. Constantly in tow is Pali, an older soldier who acts as his motorcycle chauffeur, bodyguard and, when necessary, enforcer. István is worried about the upcoming elections, but their talk also something to do with the wedding.

Other characters figure in, like pieces on a chess board. There's Kustar (József Szarvas), the town drunk, the first to panic at news of the Jews. Eszter Nagy-Kálózy is István's wife, a near-invalid who huffs on potions from the drugstore to chase away her loathing. There's also the local priest, the elderly war veteran, the wives and near-invisible lower classes.

Trolling around without apparent purpose are a trio of Russian soldiers in a battered jeep, the only tangible sign of the nascent Soviet Eastern Bloc. They observe all, occasionally threaten, keep a hand out for bribes, and act as a vaguely malevolent Greek chorus.

Shot in astonishingly crisp, gorgeous black-and-white (by cinematographer Elemér Ragályi), "1945" has the look and feel of a documentary, but the pulse and mood of well-wrought fictional storytelling. The musical score by Tibor Szemzö is a spare trickle of percussion and tones, almost like the music of a gentle stream building toward turbulence.

In every war there are aggressors, victims and bystanders. "1945" is a darkly evocative film that shows how the lines between these are much more blurred than we care to think.