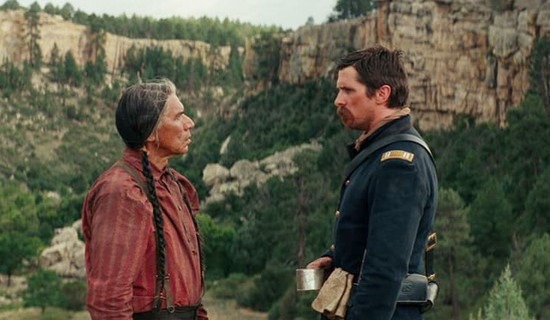 “Hostiles” was probably the best movie of 2017 that you never heard of, despite featuring some big names. It barely got a theatrical release, earning $29 million -- short of its $39 million production budget. But it’s a spare, bleak gem.

It’s a throwback-style Western that very much has Things to Say about this day and age.

Christian Bale plays Joseph Blocker, a famous Indian hunter who’s about to retire when he’s given the proverbial one last job. And it’s a doozy: escort his longtime enemy, a Comanche war chief named Yellow Hawk (Wes Studi), back to his ancestral home in Montana so he can die in piece.

Blocker is racist, alcoholic and prone to violence. Yellow Hawk is proud and reserved. His son, Black Hawk (Adam Beach), tries to broach a peace between them, but old enmities die hard.

Along the winding journey they pick up other forlorn figures. Rosamund Pike plays a frontier woman who’s just had her entire family wiped out by native warriors. Yellow Hawk and his family take her in like an adopted daughter. Seeing this, Blocker recognizes human warmth in his old enemy, possibly for the first time in his life.

The inimitable character actor Ben Foster plays a disgraced former soldier, a former comrade of Blocker’s, who’s been sentenced to die. In him, Blocker sees a reflection of himself that isn’t easy to look at.

Writer/director Scott Cooper also made the wonderful “Crazy Heart” a few years ago. He’s a filmmaker who refuses to cram his characters into neat stereotypical holes, letting each person travel their own journey in a way that feels organic.

In a time when so many movies put service to the plot above building believable characters, “Hostiles” is the sturdy exception that sees the horizon beyond.

Bonus features are limited to a single item, a comprehensive making-of documentary, “A Journey to the Soul: The Making of Hostiles.” It includes three parts: “Provenance,” “Removing the Binds” and “Don’t Look Back.”