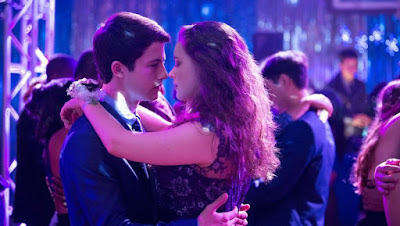 Here’s my hot take on Netflix vs. Amazon Prime in the streaming original content wars: Amazon is better at feature films, less great at TV-style episodic shows. Netflix excels at shows, though its feature films often leave much to be desired. (See -- or rather, don’t -- “Bright,” “Mute,” etc.)

“13 Reasons Why” is an ambitious Netflix streaming series that looks at teenage bullying and suicide in a thoughtful and mature way.

The concept was novel: the story opens with Hannah Baker (Katherine Langford), a smart but troubled senior, having just killed herself. Turns out she made 13 audio cassette tapes talking about why she did it, directly addressing the peers who contributed to her despair.

One tape for each episode of the show. The story unspools as a whodunit, but becomes something more.

Dylan Minnette plays Clay Jensen, the ostensible protagonist who is one of the last to receive the tapes. The deal is they have to listen to them, and pass them on to the next person, or a duplicate set will be released publicly, revealing their dark deeds.

We eventually learn that Dylan was in love with Hannah, though their tortured romance never found its way to full bloom. He’s shy, dweeby but with a heart of gold. However, most of Hannah’s other interactions were not nearly so positive. Labeled the school slut for dubious reasons, she found herself riding a train downbound into despair.

Her chief antagonizer was Bryce (Justin Prentice), the charismatic captain of the basketball team beloved by all. But even people Hannah thought were her friends, like sardonic Zach (Miles Heizer) and party girl Jessica (Alisha Boe), end up hurting her in the end.

Standing slightly apart from the group is enigmatic Tony (Christian Navarro), a blue-collar kid with his own set of secrets. He acts as the protector of Hannah’s legacy, safeguarding the tapes and serving as friend/counselor to Clay.

Like a lot of streaming shows I’ve encountered, “13 Reasons Why” has a tendency to start slowly, not really hitting its stride until the fourth or fifth episode. And the hour-long chapters occasionally tread water, with pivotal conversations constantly starting and being interrupted by circumstances in what plays as a transparent attempt to pad the running time.

Maybe “9 Reasons Why” would have sufficed.

Still, this is a smart, sensitive and well-told tale with some really solid performances. Anyone who remembers their teen years without rose-colored glasses can probably relate.

Video features are pretty good, and go beyond the interviews with cast and crew that were available on streaming Netflix at the time of the show’s release. They include these documentary shorts:
Show: