Review: "You Were Never Really Here" 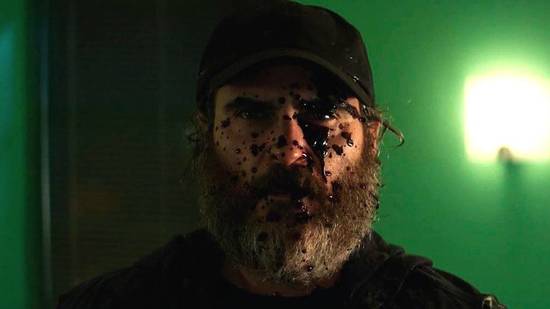 Joe -- which may not be his real name -- is a lonely person, stuck somewhere between hero and villain, not caring much about the shadings between the two. He’s a man of mystery, but also a complete open book, in that everything about him is laid bare without pretense.

Played by Joaquin Phoenix in another one of his bizarre, affecting, only-he-could-pull-it-off performances, Joe is a hired thug who specializes in tracking down young girls who have been kidnapped and put into the sex trade. He’s an ex-something -- soldier, cop, maybe DEA or ICE -- we’re never really sure. Clearly his past life taints him.

Joe’s body is thick, strong, crisscrossed with scars. Hair and graying beard grow unchecked, pinned back as necessary when the work becomes wet… which is often.

“You Were Never Really There” is a sketch of a man who has no self-identity beyond what he does. Joe is brutal, preferring to use a hammer to split open the skulls of those he encounters. (It says something that he buys a fresh one for each job.) Yet he speaks with a gentle, muffled voice, even when interrogating someone he needs to squeeze for information.

He has lived with violence all his life; it is his constant companion but not his bride.

Writer/director Lynne Ramsay, whose last feature was the disturbing “We Need to Talk about Kevin” in 2011, gives us a very spare, deliberately paced film about revenge and persona. Based on the novel by Jonathan Ames, Joe is a man haunted by demons, but able to keep them at bay -- until his latest job goes bad, bad, bad.

Without giving anything away, it involves working for a state senator (Alex Manette), whose daughter, Nina (Ekaterina Samsonov) has been taken. Much is left unspoken, but the politician knows more than he is saying.

Joe’s life is quiet and ordered, outside of the grim work he performs at night. He cares for his elderly mother (Judith Roberts), who is homebound and watches TV all day. Joe nags her for having expired food in her fridge, or taking too long in the bathroom. But it’s clear he would never leave her.

Flashbacks give hints to domestic violence in their past. To calm his nerves, Joe likes to go into the closet of his boyhood bedroom and place a plastic bag over his head. He’s not trying to suffocate himself; certainly he gains no sexual pleasure from it (or possibly from anything). It’s just his way of coping with the past by recreating it.

There’s not much else to the story. John Doman plays Joe’s frontman, who finds him jobs in exchange for a cut. Angel (Frank Pando) is his bodega banker, handling the cash for his own little piece of the action. His dealings with both men are curt, unemotional. They are the closest things to friends a guy like him can have.

Ramsay takes her time building the ingredients of her tale, which is based on a novella by Jonathan Ames. She favors long shots that just show the things Joe is seeing as he travels from place to place. I daresay some people will find the movie slow or even dull.

I think it has a darkling loveliness that’s hard to compare. The inharmonious musical score and soundtrack of old songs, especially “Angel Baby,” lend the film a creeping nostalgia. Phoenix is moody and mesmerizing, worth the price of admission all on his own.

In the end, “You Were Never Really There” is an existential portrait of a killer, someone who sees himself as utterly empty, who only realizes the value of things after he has lost them.