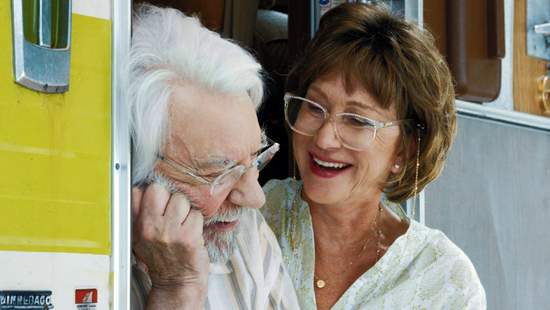 There’s nothing really extraordinary about “The Leisure Seeker,” which is the very thing that makes it such a lovely little film.

Helen Mirren and Donald Sutherland play a couple in their 70s from Massachusetts who spontaneously embark on a journey to the Florida Keys in their 1975 Winnebago Indian, whose nickname supplies the film’s title. The old RV hasn’t seen a lot of action in a while, more a vehicle for memories of family vacations than an actual conveyance.

You could say the same of the pair, who seemingly have had their lives stuck in stasis for a long, long time.

It doesn’t take a lifetime for director Paolo Virzì and his quartet of screenwriters (based on the novel by Michael Adoorian) to reveal the purpose behind the trek. John Spencer (Sutherland) is struggling with some sort of dementia. Ella Spencer (Mirren) pops a lot of pills, and when she takes off her wig at night reveals the sort of short-cropped ‘do worn by chemotherapy patients.

The exact nature of their ailments is never stated, but we gather enough to know that Ella’s life is slipping away, while John’s memories are doing the same.

Like “The World’s Fastest Indian” and other road trip films involving seniors, the destination of where they’re going is less important than the reasons for setting off on this jaunt.

The Spencers have a variety of encounters along the way, some positive, a few not, most of them fleeting. Ella is a charming chatterbox who loves to talk to anybody, or everybody. John tends to trap people in long ruminations on Hemingway or other favorite writers, but usually winds up making a connection nobody expected.

Back at home, their grown children Will (Christian McKay) and Jane (Janel Moloney) are appalled at what’s going on. They had apparently convinced their parents to take some critical steps with regard to their lives -- likely involving institutions and/or hospitalization -- and are left worried sick, and resentful.

The usual sorts of encounters you might expect occur -- mechanical troubles, a run-in with Johnny Law, a meeting with miscreants -- but we never really doubt the couple will get where they’re going. Given John’s affinity for Hemingway, it’s no surprise that he’s always dreamed of seeing the (fantastically overrated, imho) writer’s home in Key West, and Ella wants to make that wish come true while there’s still a little time left.

What’s best about the movie is how it drills deep into a 50-year marriage, showing us that while the fire of passion can remain undimmed after all that time, there will naturally be resentments and recriminations that have piled up in the passing of years. John is peeved about Ella’s boyfriend prior to him, convinced she still pines for him, while Ella harbors suspicions about the many young coeds who were mentored by John in his role as a literature professor.

This is also a very realistic portrait of dementia. John can be spot-on one moment, then loses his way the next. He’ll protest his undying love for Ella, then a few minutes later confuse her for their next-door neighbor back home (Dana Ivey). “The Leisure Seeker” also shows us the strains placed on the caregiver, as Ella occasionally snaps after years of unceasing support.

Getting old is both a beautiful and scary thing, especially when two people in love do it together. Marriage is a journey, quite literally in this case, and the bumps in the road are often what we hold onto best.