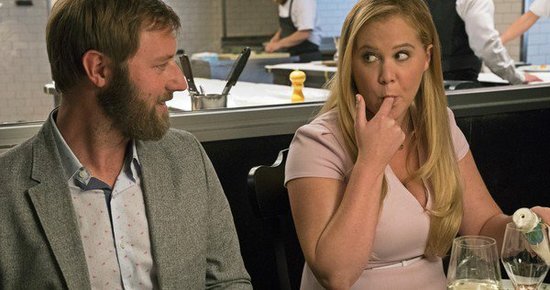 “I Feel Pretty” is explicitly in the rich tradition of body switcheroo comedies like “Big,” with the caveat being that star Amy Schumer doesn’t actually change at all. Her character just thinks she does, and that gives her the wherewithal to live a life so utterly without fear, she’s able to make all her dreams come true.

The joke is that Renee Barrett (Schumer) is a frumpy girl who believes she’s just reacting to a world that suddenly shines down its approval upon her because she’s become spectacularly beautiful, when in fact it is she who is acting in a way that makes people take notice, smile and wish good things for her.

It’s dangerous for a man to talk about women’s body issues without risking alienation, but the theme is at the center of the movie, written and directed by Abby Kohn and Marc Silverstein, who previously made “The Vow” and “How To Be Single.” So here goes.

Schumer has the smart, sassy comedic persona of a swinging bachelorette. She likes to poke fun at herself, while also inserting cutting digs about how society only values women if they look a certain way, especially thin. Schumer has a figure that’s probably about average by modern American standards, but decidedly chubby by Hollywood’s merciless yardstick.

Someone of my mother’s generation would blurt something like, “she’s got extra pounds, but she wears it in all the right places.” She looks just fine to these eyes, but hey, it’s not about pleasing this here male gaze. It’s about accepting, and even liking, what you’ve got.

Renee works in the crappy web division of cosmetics giant LeClaire, an underground cave consisting of just her and a gruff, uncommunicative computer geek (Adrian Martinez). She’s got two great friends as wingwomen, (Busy Philipps and Aidy Bryant), but the New York City dating scene is brutal for “plain” girls. The trio signs up for Grouper, a group dating website, and is crushed when their fun-loving photo garners zero views.

Anyway, Renee gets conked on the head while at spin class, and wakes up thinking she’s magically transformed into the most beautiful person in the world. She’s worried her pals won’t even recognize her. Some of the film’s best scenes are of regular people running into this prideful, energetic woman, and their quizzical reactions to her confidence.

If their thoughts could be put into cartoon word bubbles over their heads, it would go something like this: “Hey, you’re not allowed to act gorgeous unless you actually are.”

The flip side is that people are eventually so ensorcelled by her verve, great things start happening to her. She’s given a job as the main receptionist at LeClaire, and soon charms the family of owners into letting her be the face of their new lower-cost cosmetics line.

Michelle Williams plays Avery, the CEO who has an MBA from Wharton’s, but is constantly undercut because of her kewpie doll voice. Tom Hopper is the rapscallion brother, Grant, who doesn’t do much but looks great in photo shirts that are perpetually two sizes too small. He finds himself pitching woo at the cherub-faced dynamo. Lauren Hutton plays the grandmother, who wants to upend their brand’s fancy-schmancy image.

I also liked Rory Scovel as Ethan, the regular joe who finds himself more or less coerced into a relationship with Renee. He’s at first bemused, then horrified, then entranced by this woman who goes for what she wants, and gets it. “You’re so yourself,” he says, awestruck.

The filmmakers make an interesting choice by never actually depicting what Renee thinks her new form looks like. Such a thing might have been off-putting, like when they did something similar for Gwyneth Paltrow in "Shallow Hal."

There’s a great scene where Renee enters a bikini contest, shaking her ample assets up against women without an ounce of jiggle, and her enthusiasm gradually wins over the skeptical crowd. In most movies she’d win the prize, but here the heroine has so much zest it barely even matters.

“I Feel Pretty” is a feel-good comedy with some decent laughs and a few nice lessons along the way. At 110 minutes, the film would’ve been better if it was a bit skinnier, something often true of movies but not so much for women, who’ve been pummeled into thinking less is always more.