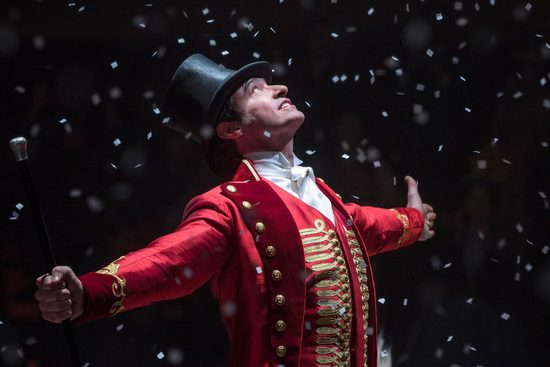 “The Greatest Showman” was perhaps the quietest blockbusters of the past year. Released around Christmastime, it garnered respectful but not gushing reviews, and opened to modest buzz and box office. But this energetic musical, starring Hugh Jackman in a (very) fictionalized portrait of circus pioneer P.T. Barnum, kept staying around -- it “has legs,” as they say in the biz -- and ultimately grossed more than $400 million worldwide.

It’s a solid picture, filled with Broadway-style spectacle and songs, the sort of thing where the characters look right at you and belt their stories out in crescendoing first-person power ballads. It doesn’t feel particularly fresh or new, but it’s hard to deny the sheer entertainment value.

In this telling -- original screenplay by Bill Condon and Jenny Bicks, directed by rookie Michael Gracey -- Barnum is a dreamer who wants to spread joy to the world, as well as give a home to those who have been cast out and kicked aside as freaks. Michelle Williams plays his long-suffering wife, Charity, and Zac Efron is Phillip Carlyle, the young business-minded fellow who becomes his right-hand man.

The circus performers are a rogues’ gallery of bearded ladies, strongmen, Lilliputians and the like. A few stand out, notably Keala Settle as Lettie, the furry-chinned woman who can also knock the barn doors down with her voice, and Zendaya as Anne, a trapeze artist who dares a mixed race romance with Phillip.

Jackman, who also closed the book on his Wolverine character last year, is back in his element as a song-and-dance man, charismatic and haunted. During the course of the tale, Barnum goes from low to high and back again, tempted by a famous songbird (Rebecca Ferguson) he signs to a contract to show the world he’s not just a purveyor of oddities.

People keep saying “the musical genre is back,” until it goes away again. As long as we get a good one every few years like “The Greatest Showman,” I’m all in tune.