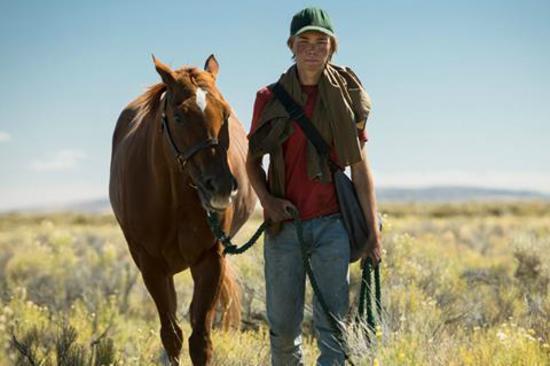 This was not the film I was expecting.

You’d think a movie about a boy and a horse would be uplifting and affirming; e.g., damaged human and damaged animal learn to heal together, in the mold of “Seabiscuit.” But stories about young people who grow attached to animals have a long cinematic tradition of sadness and loss.

“Lean on Pete” is from writer/director Andrew Haigh, whose last film, “45 Years,” was a sharp and probing exploration of the hidden pain behind a long marriage. Based on the novel by Willy Vlautin, “Pete” is about a teen boy, Charlie (Charlie Plummer), who has managed to keep a positive outlook despite a life filled with uncertainty and abandonment -- emotionally and otherwise.

Then he gets a job working for a bottom-feeding horse trainer, chiefly looking after an over-the-hill, never-was quarterhorse named Lean on Pete. Normally in a movie of this sort, this would be when circumstances start to turn around for Charlie. He’d start riding Pete, they win the big race, etc.

But instead, things turn into a pile of manure as big as those he shovels out of the stable on a daily basis.

Obviously I don’t want to give anything away, but suffice to say it involves a cross-country journey in which Charlie and Pete are running away as much as they are running toward something. It’s a noble quest, not for any higher purpose beyond continued existence and respect as living beings worth more than what they can do for others.

Plummer is terrific, playing a man-child -- he supplies his age as 16, 18 or 15 at various times -- who is going through big life-changing experiences before he has had a chance to form the emotional armor to protect him. It’s that time in a person’s life where trivialities seem momentous, while truly impactful things are shunted to the side until we can deal with them.

His dad is Ray (Travis Fimmel), a blue-collar loser who moves from place to place and job to job, partying and sleeping around. But he truly loves his kid, and gives Charlie positive encouragement -- at least when he’s around long enough to do so. Charlie mostly lives off Cap’n Crunch and TV.

A new father figure appears in the form of Del (Steve Buscemi), a fourth-rate horse trainer. He used to run around 20 horses, now he’s down to a handful. He tools around in his ancient Ford pickup and trailer, anywhere he can make a few bucks running his horses in a race, whether it’s at a decaying track or just a barn jump.

Del takes Charlie under his wing, showing him the ropes and praising the young man’s work ethic. But he shoos Charlie away from the racing life. “You should do something else, before you can’t do anything else,” Del says.

Charlie also finds a friend in Bonnie (Chloë Sevigny), who rides jockey for Del from time to time. She tells Charlie about what it’s like to be a woman in an old-school man’s sport, freely offering her friendship and advice. Such as: don’t treat the horses like pets. Lean on Pete is scraping the bottom of Del’s very shallow barrel, a 5-year-old quarterhorse who’s just fast enough to win a few purses before age and injury catch up.

But it becomes clear that Del, and even Bonnie, view Pete and his ilk as mere conveyances for their own curdled dreams, to be used and cast off as needed. Del makes cryptic references to selling horses “down to Mexico,” and it’s not hard to guess what that means.

I admit that when the film embarked on the second half of its journey, I was initially reluctant to go along on their tough ride. Charlie and Pete have some run-ins, mostly bad, though they encounter a few kind souls. Plummer, already a slender kid, grows positively stick-like as their fortunes fade.

Haigh doesn’t give us the usual easy emotional entry points. For example, he doesn’t shoot Pete in close-up, to suggest the bond between man and beast. And Charlie never once climbs onto Pete’s back. He doesn’t want to be just somebody else demanding a fast ride.

“Lean on Pete” is the wrenching story of a young man yearning for the simplest thing: to be loved and wanted, and return the same. For a while, the best he can do is a horse no one else sees much worth in. That shared need gives them a sort of startling grace.