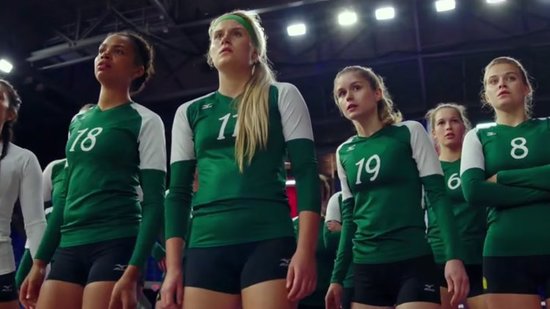 Movies like “The Miracle Season” flow like the tide -- you know exactly what it is and where it’s going. Most sports flicks possess this same sort of inexorable pull: confidence, challenge, struggle and then triumph.

There are not many surprises in “The Miracle Season,” but it’s a well-executed film that hits all the right notes and doesn’t let the on-field action overwhelm the human story. Having performances by two world-class actors -- Helen Hunt and William Hurt, both Oscar winners -- doesn’t hurt, either.

Directed by Sean McNamara (“Soul Surfer”) from a script by Elissa Natsueda and David Aaron Cohen, it’s based on the true story of the girls’ volleyball team at West High School in Iowa City. (Tax-credit-friendly Vancouver subs in for Iowa.) After winning the state championship in 2010, the team was crushed by the sudden death of its captain, best player and irrepressible leader, Caroline “Line” Found.

After forfeiting or losing the entire early season, the team comes together to make another run at the title. I won’t spoil things by saying how it turns out, but if you have to guess then you haven’t seen a lot of sports flicks.

(“Rocky” remains near the pinnacle in part because it’s one of the very few where the victory is less important than how the big match plays out.)

Erin Moriarty is the main character as Kelly, Line’s best friend. She’s a bit shy and retiring -- everyone is, compared to Line -- and isn’t nearly the dominant player. Indeed, as their senior year opens, Kelly doubts she’ll even make the starting squad. But Line is indefatigable, offering boundless encouragement and friendship to literally everyone she meets.

Played by Danika Yarosh in an attention-grabbing performance, Line is the sort of person who will drive by a family moving into their new home, spot a cute boy, slam on the brakes and hop out to introduce herself and invite him to their party the next day.

Hurt plays Line’s dad, Ernie, a surgeon/farmer who’s also dealing with a severely ill wife. The movie grants him his own journey, including struggling with his faith in the face of tragedy in a sensitive way we don’t usually see in mainstream Hollywood films. A quaint, somewhat bumbling figure who likes to perform corny magic tricks for the team, Ernie gradually takes on a sort of accepting grace.

Hunt has a difficult part as the coach, Kathy “Brez” Bresnahan. She’s a very interior person who has always given her girls tremendous expertise on the court but not a lot of emotional support off it. But the death of her best player forces Brez out of her comfort zone, making her relate to the team members as people rather than pieces to a winning season.

The other team members form the usual sort of Greek chorus of supporting players. Natalie Sharp is Mack, the tough, aggressive one; Lillian Doucet-Roche plays Taylor, the freshman lacking in confidence; Nesta Cooper is Lizzie, who plays with her emotions on her sleeve.

The volleyball scenes are energetic without overstaying their welcome. There haven’t been too many volleyball movies that I can think of, but “The Miracle Season” shows the kinetics and power of the sport. The sound crew also underlines each thump of the ball with a fat bass undertone.

You won’t be surprised by anything that happens in this movie, but darned if you’ll be able to resist having those ol’ heart strings plucked.