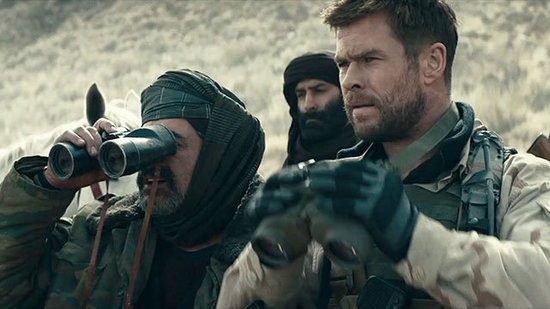 War films don’t generally score much of an impact in movie theaters these days. Along with Westerns, they’ve fallen out of favor as our culture increasingly favors hipster dweebs over old-school examples of manliness. I’m closer to dweeb than cowboy myself, but I can still recognize the loss in our cinematic richness.

“12 Strong” stars Christopher Hemsworth and Michael Shannon in the true story of the very first ground troops sent into Afghanistan after 9/11. Those references you heard at the time about soldiers on horses taking on Russian-made tanks? That was these guys.

It’s a rousing war picture that also has some historical lessons to impart about culture clash. The Taliban enemy, and to a large extent even their nascent allies, came from a tradition of embracing an honorable death, but also of lots of infighting and internal strife. The Horse Soldiers, as they came to be known, were Army special forces, spent as much time preventing civil war as taking on the terrorists.

Hemsworth is Mitch Nelson, captain of his elite team, who has a lot of sense but not much in-combat experience. Shannon plays Cal Spencer, the grizzled noncom who acts as his right-hand man and subtle mentor.

Rounding out the cast are Michael Peña as another savvy veteran, William Fitchtner as the ops commander and Rob Riggle -- best known for his comedy but a real-life Marine -- as Nelson’s direct superior.

The movie’s a bit too long (most are these days, it seems), with director Nicolai Fuglsig growing a little too enamored of lengthy battles in which bullets fly and cameras whiz around the action. Still, it’s a solid war movie in a time when such things are rarely even made, let alone any good.

Perhaps owing to its middling box office performance, the film is being issued on video with a modicum of bonus features. Available only on the Blu-ray combo pack, they consist of two featurettes: