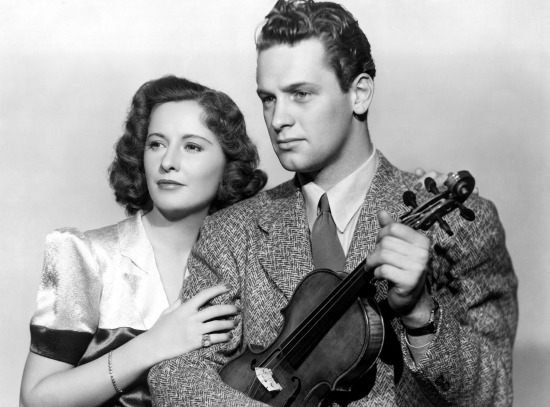 "Golden Boy" was William Holden's very first feature film, and nearly his last. The studio didn't like his looks or his acting style, and was determined to fire him in the middle of production. But star Barbara Stanwyck fought for her young colleague, he was retained, the picture was a big success and Holden became a sensation overnight.

Nearly 40 years later, while presenting an award together at the Oscars, Holden momentarily interrupted the ceremony to publicly thank her for saving his career, which was long and illustrious. So should we all.

The movie itself is a rather mushy romance about a young boxer who must choose between the ring and his love for the violin, with his manager, the manager's moll (Stanwyck) and the fighter's family acting as proxies in the tussle over his devotion. The plot isn't terribly interesting, though the dialogue and characterizations, based on the play by Clifford Odets, are quite vivid.

"Golden Boy" probably has the least amount of pugilism of any boxing movie. Director Rouben Mamoulian ("Queen Christina") doesn't bother with even cursory highlights of the matches, simply showing quick montages of Holden throwing punches that last but a few seconds each. Up until the final bout, we don't even get so much as a wink at his opponents.

When the big fight does finally arrive, I have to say Holden's not a terribly convincing boxer. He tends to do that side-to-side punching thing, almost slapping, that is the hallmark of someone who doesn't know how to fight.

The young thespian had to learn how to play the violin for the role, or at least look like he could, and I guess also learning to box would've been a bridge too far.

I'm not sure if the film was shot in chronological order -- which was more common with studio pictures of this era -- but Holden's line deliveries and expressions are indeed rather stiff in the early scenes. As kid boxer Joe Bonaparte, he calls his father "Papa" as if he's trying to caress each syllable like a delicate, newly-laid egg. But he gets a lot better as time goes on, and by midway it's vintage Holden, all fiery drive and passion.

I should also mention the score by Victor Young is quite beautiful, filled with lush strings as you might expect given the title character's musical proclivities. It earned the film's only Academy Award nomination.

The cinematography, by Nicholas Musuraca and Karl Freund, is also quite nice, with a lot of depth and shades of gray in the black-and-white. The film has been well preserved, with virtually pristine prints transferred to DVD and Blu-ray.

As the story opens, Joe is about to turn 21 and is living with his family in the apartment behind his father's grocery. He's been studying violin for the past decade but hasn't been able to turn it into a playing career. He's been spending the last year or so hanging out at local boxing gyms, practicing and studying the techniques.

When a fighter breaks his hand right before a bout, he begs the manger, Tom Moody (Adolphe Menjou), to give him a shot in his stead. Moody is at the bottom of his barrel, wistfully recalling the money days of 1928. His estranged wife is demanding $5,000 for a divorce so he can marry his much-younger girlfriend, Lorna Moon (Stanwyck), a hard-bitten type whose gold heart will eventually be unearthed.

"Oh, leave it to me, Tom. I'm a dame from Newark and I know a dozen ways," she says, in just one of the twinkly lines of dialogue.

You can pretty much guess where things go from there. Joe turns out to be a wunderkind in the ring, quickly moving up the ladder into big money, which of course goes to his head. He and Lorna fall for each other, but she feels loyalty to Tom and manipulates Joe to further his ends, which Joe eventually finds out about.

He accepts a bid from Eddie Fuseli (Joseph Calleia), the local mafia don, to take over his contract so he can get a prime match at the Garden. Soon all the stakes are riding on the fight against big-name contender Chocolate Drop (real life boxer-turned-actor James "Cannonball" Green). I appreciated that this is the rare boxing movie that doesn't end with a crack at the championship.

It was also interesting to me that the movie treats African-Americans in way that's pretty respectful for 1939. White and black boxers are shown training side-by-side, without fuss. Chocolate Drop is heavily favored in their bout, to the point the assembled reporters dismiss Joe as Fuseli's inept upstart. The black and white audience sections, though segregated, cheer lustily with equal fervor for their gladiator.

When Joe accidentally kills Chocolate Drop, there's a very touching scene where Joe goes into his opponent's room to apologize to his family. Clinton Rosemond (uncredited), as the father, gives a terrific little speech when Joe alludes to committing suicide, telling him that everyone has their burden to bear, and this killing will be his.

The father character is a small counterpoint to the other huge figure in the movie, Joe's dad, played by Lee J. Cobb in a masterful performance. Cobb is best known for playing middle-aged anger and strife, most notably as the bigoted jurist in "Twelve Angry Men." But he gives a completely ravishing turn as a simple-minded but big-hearted Italian immigrant who abhors Joe's fighting and only wants him to play the violin.

Outfitted with big curly gray hair and ethnic mustache, Cobb is pitch-perfect in showing the man's utter broken-heartedness when Joe turns away from music, refusing to touch the magnificent Ruggieri violin he saved $1,500 to buy. (That's $26,000 in today's money.) This big, beaming man seems to slowly fade into himself, his shoulders stooped and his eyes hollowing out.

It astonished me to learn that Cobb was barely six years older than Holden at the time -- he had not yet turned 28 when "Golden Boy" debuted. I completely believed him as a broken-down old man.

Beatrice Blinn plays Joe's sister, Anna, who lives with her husband, Siggie (Sam Levene), at her father's. Siggie is a character unto himself, perpetually schlepping around, wearing a wifebeater shirt and chomping on a stogie butt, complaining about not having enough money to buy his own taxicab. Despite his carping, Joe's father (he's never given a name) treats Siggie with respect, even when his son-in-law playfully slaps Anna on the rear.

Edward Brophy is the resident comic relief as Roxy Lewis, Tom's perpetually flustered partner, who owns 10% of Joe's contract. William H. Strauss has some nice moments as Mr. Carp, the elderly neighbor who comes around to kvetch with Joe's papa. I also liked Don Beddoe as Borneo, the trainer who knows his place is in the corner of the ring, but is still willing to stand up for the kid and offer him advice.

It took a foursome of screenwriters to adapt Odets' play into a movie -- Lewis Meltzer, Daniel Taradash, Sarah Y. Mason and Victor Heerman. There's always a challenge in stage-to-screen translations, but the strength of the distinctive characters, the emotive cast and the smart dialogue carry the day.