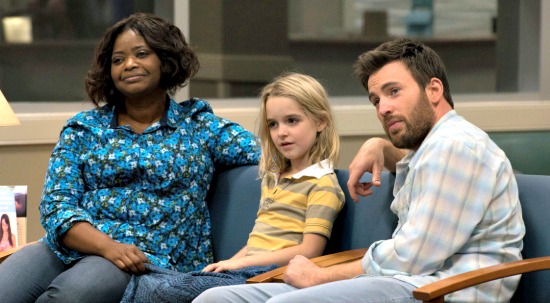 A small film with some huge names attached to it, “Gifted” is a tender little drama about an extended family fighting over the fate of a 7-year-old girl genius. Directed by Marc Webb, best known for the previous two Spider-Man movies, it’s a touch formulaic but well-acted and earnest.

Chris Evans plays Frank, uncle to the girl, Mary (Mckenna Grace), whose mother took her own life some years ago. Now she lives with Frank in a grubby community of rental homes in a part of Florida where the tourists don’t flock. He fixes boat engines for a living, but has his own past that we’ll find out more about down the line.

Octavia Spencer is Roberta, friend a maternal figure to Mary, and Evelyn (Lindsay Duncan) plays Frank’s mother, Mary’s grandmother. She pops up about halfway through the movie to sue him for custody of the girl.

Grandma wants to take Mary to a very specialized educational facility where she can work on big-brain mathematical problems – in particular, one her mother failed to solve. It’s clear Evelyn sees her granddaughter as less a child to nurture than a source of greatness that has gone untapped.

Frank would prefer that Mary stay in a regular school to gain better emotional intelligence and just be a kid. But the movie (screenplay by Tom Flynn) acknowledges that there are flaws in his line of thinking, too. Mary’s own teacher (Jenny Slate) is among those who thinks the girl would be better served in a special setting, even as she tries to resist her own attraction to Frank.

With a little bit each of family melodrama, courtroom intrigue and character study, “Gifted” is a simple movie about some large issues. It may not be the smartest or most original movie around, but it never hits a false moment or fails to engage the heart.

Bonus features are adequate, and are identical for the DVD and Blu-ray editions. These include five deleted scenes, a production gallery of still photos and location footage. There are also five making-of featurettes: “Gifted: A First Look,” “Story,” “An Accomplished Cast,” “Inside the Equation” and “Marc’s Method.”