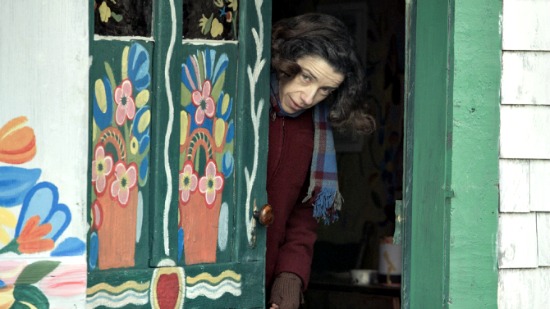 With every one of Sally Hawkins' endearing, deeply etched film roles, we fall a little bit more in love with her.

Hawkins' performance as Maud Lewis is essentially a portrait of pure love. Maud was a woman from Nova Scotia who was racked by crippling rheumatoid arthritis from childhood. She spent most of her life in a tiny shack without electricity or running water, living in abject poverty with her husband, Everett, a fish peddler who was gruff and ornery on his best days, a much worse on his worst.

Despite this, Maud became a renowned artist whose work was collected far and wide. Her paintings were bright, bold sweeps of unmixed colors, flowers or other nature scenes. She painted on almost everything: cards, pieces of scrap wood, virtually every single surface of their cottage. Today Maud's entire house is a work of art enshrined inside a museum.

Directed by Aisling Walsh from a screenplay by Sherry White, "Maudie" focuses not on the tiny, disabled body but the titanic soul contained within it. Hawkins portrays Maud's disease without fetishizing it, a slightly crooked, awkward woman who becomes more bent and bowed with the passing of years, her little hop of a limp turning into a tremulous stagger.

But that's not what the movie is about. Indeed, I don't think the word "arthritis" is even spoken aloud until near the end.

Like nearly all of Hawkins' other roles, even the most tragic of circumstances cannot bury her character's joyful essence. Maud smiles and twinkles, even when she is ignored or treated ill, always finding a way to carry on and hope for better.

Among those failing to give Maud her due are her Aunt Ida (Gabrielle Rose) and brother Charles (Zachary Bennett). They view Maud as a naive invalid, someone to be looked after and kept inside tight bookends of their own proscription. After Charles sells the family home to fund his business schemes, Maud is forced to live with Ida, under her strict rules -- a kept woman with no lover.

Certainly, Maud is not very smart in the traditional sense. She's a simple woman of simple tastes and desires. She wanders down to the local club to have a beer and do a little dance by herself, which Ida finds scandalous.

Then Maud spies a disheveled man coming into the local five-and-dime store to advertise for a housemaid. The man is obviously simple-minded, prone to outbursts of anger, and fiercely independent. Despite this, Maud answers the ad, seeing an opportunity to move out of Ida's place and have a piece of life that is her own.

The advertisement is for a live-in position, despite the fact the man's shack would qualify as what we today call a "tiny home," with a single walk-up loft bed. It soon becomes apparent that what the man was really advertising for was a wife to look after him.

We hear Everett before we see him, and it's hard to believe that sound could come out of Ethan Hawke. Low and guttural like a pair of stones being ground together, Everett's voice is that of a man not used to speaking, because he does not have much to say.

Everett is very particular about how things are done. He believes his home is his castle, and he the unquestioned lord. Everett is at once a very proud man and one who believes that everyone looks down upon him. Possibly there are undiagnosed mental health issues.

The arrangement causes a minor scandal in their little town -- "shacking up together" is tossed around. Maud doesn't really mind, and part of her is happy to be noticed at all, or spoken about in a romantic context.

The relationship, such as it is, gets off to a rocky start. There are outbursts, controlling behavior, even some physical violence. Everyone expects Maud to crawl back to Aunt Ida's. But she stays, the wavelength and intensity of Everett's rages become wider and smaller, and they settle into something like a routine, which finally becomes a marriage almost by default.

There's not much house to clean, so Maud passes the time painting little flowers here and there to brighten up the place. One of Everett's fish customers, a sophisticated woman from New York named Sandra (Kari Matchett), notices one of Maud's doodles and offers 25 cents for it.

Soon others buy them, painting becomes a regular source of income, and eventually people from all over stop by the little house to purchase a Maud Lewis original. Newspaper reporters and TV camera crews come calling.

Everett begrudgingly takes over the chores so Maud can have more time to paint -- which is as close to an overt expression of love a man like him can utter.

In its own plain way, "Maudie" is an incredibly beautiful movie. The photography by Guy Godfree has an unornamented charm, and the sweet strings of Michael Timmins' musical score sing a lullaby of humble passion.

Walks are used as a visual representation of Maud and Everett's evolving relationship. At first she walks behind him while he pushes his cart of goods about town; later they walk together, then she sits in the front of the cart facing away from him, and finally she rides nose-to-nose with her husband.

I think these are among the finest performances of both Hawkins' and Hawke's careers -- and that's saying something. Theirs is a duet of troubled love, expressing how two people with fierce challenges and emotional limitations can find contentment and a sense of permanency together. Both should remembered come time for Academy Award nominations.

"Maudie" is a quiet, candid movie that reminds us that beauty is not just found, it often must be made.

Posted by Christopher Lloyd at 3:07 PM