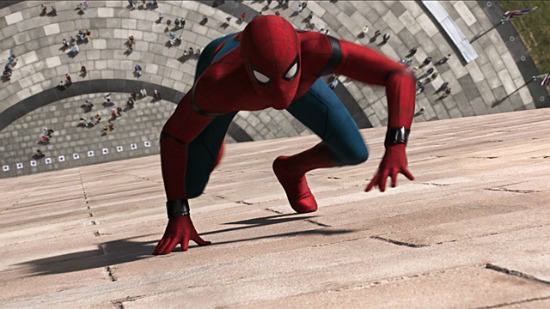 
The newest film iteration of the most popular hero in the Marvel catalogue, “Spider-Man: Homecoming,” is a lot like a real teenager. It’s uneven, running hot and cold, is more than a little neurotic, self-centered and even annoys you at times.

But the movie is also filled with a vibrancy that practically beams off the screen like a beacon.

I know, I know… it seems crazy to think this is the sixth Spider-Man movie in just 15 years -- plus a featured turn in the last Avengers flick -- with three different sets of stars and filmmakers.

But honestly, I’m not tired of it. Especially when “Homecoming” takes things in quite another direction. More than any other super-hero movie, this Spider-Man is unsure of himself, hesitant, even scared.

Speaking of the number 15, that factors heavily into this conception of the webslinger: that’s how old Peter Parker is supposed to be. Think about that for a moment. Consider what you were like at 15: your decision-making powers, your sense of responsibility, how able you were to resist temptation when it presented itself. Now imagine you can lift a tractor and dodge bullets.

Star Tom Holland was 20 when they shot this movie, but easily passes as a high school sophomore. He uses a tremulous voice and an expressive face to portray a kid struggling to find his place in the world alongside some very unique challenges. His yearning to belong, and to be something more, is palpable and affecting.

As the story opens, Peter is sneaking off from school and shunning any social engagement to work on “the Stark internship” -- the cover story he feeds to his Aunt May (Marisa Tomei) and few friends, notably exuberant fellow nerd Ned (Jacob Batalon). That’s a reference to Tony Stark, aka Iron Man, who gave Peter a super-suit to upgrade his red-and-blue underwear. Robert Downey Jr. shows up a few times to mentor or berate, as needs be.

But after helping in the Avengers clash, future missions are not forthcoming. Peter’s texts and calls to Stark and his right-hand man, Happy (Jon Favreau), largely go unanswered. Instead of getting what he really wants -- an invitation to join the Avengers team -- Spidey spends his time fighting petty criminals in and around his home in Queens.

He runs afoul of Adrian Toomes, a blue-collar scrap man who stole some alien technology from the extraterrestrial attack depicted in the first Avengers movie and is turning it into powerful weapons he’s selling on the street. Played by Michael Keaton, Toomes also has his own winged flying suit -- Peter dubs him the Vulture -- and a crew of henchmen, including Bokeem Woodbine as a guy which a shockingly strong prosthetic fist.

It’s not one of the better villains in the Marvel movies, but the filmmakers have made a conscious choice to focus more on the guy behind the Spider-Man mask than concocting some world-beater threat. There’s also no J. Jonah Jameson, Daily Bugle or freelance photographer job.

There are girls, though, specifically two: Liz (Laura Harrier), a smart senior Peter has been crushing on for some time; and Michelle (Zendaya), a morose outsider who always seems to be hanging around the fringes with Peter and Ned, mocking them for their loser status while embracing her own. They’re all on the academic all-star team together (or quiz bowl, as they called it back in my day), so there are opportunities for trips and trysts.

Director Jon Watts nails the angst and turmoil of his protagonist. I wish his action scenes were better-staged, often seeming jagged and off-angle. The screenplay could use some tweaking and trimming, but with six (!) credited writers, we’re definitely wading deep into creation-by-committee territory here.

The movie is clever and full of self-aware humor, such as when they mock the famous upside-down kiss from the first movie. “Spider-Man: Homecoming” wisely doesn’t ignore the previous films, but acknowledges the hero’s mythological middle age while finding a new offshoot that’s young and fresh.