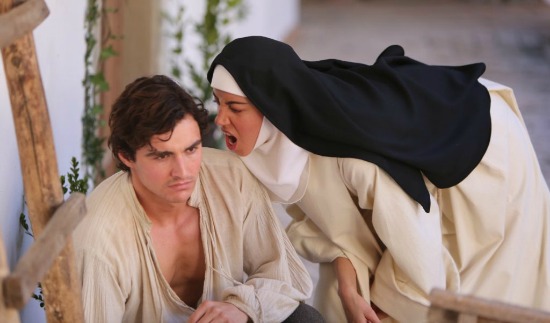 I haven’t read “The Decameron” by Italian master Giovanni Boccaccio, but a bawdy American version complete with modern vernacular, lots of cursing and sex isn’t as out of place as it might seem. The 14th century collection of 100 stories focusing on love, virtue and mercantilism was very much a product of its time, as is this comedic iteration starring a cast of familiar screen humorists.

Plus, you’ve just got to admire the gumption of making a flick based on an obscure (to most people) medieval text that gives an excuse for a bunch of well-known comediennes to get their kits off.

I enjoyed the movie in pieces, though even at a slender 89 minutes it starts to feel like a last-third “Saturday Night Live” sketch that ran too long.

Based on one tale by Boccaccio, writer/director Jeff Baena’s story is centered on a remote convent near Cartagena in 1347. Father Tommasso (John C. Reilly) is the benign and rather ineffectual priest, while Molly Shannon plays Sister Marea, the head nun who really runs the place.

Most of the resident nuns are young, repressed sorts yearning to misbehave and break out of the boredom. Alison Brie is Alessandra, goody-goody daughter of a merchant whose donations largely support the convent. She’s just doing the nun thing while dad (Paul Reiser) builds up the dowry so she can get married, but business is bad.

Genevra (Kate Micucci) is the neurotic, annoying one whose thing is tattling on the other nuns’ misdeeds. (Sister so-and-so took two portions of turnips, doncha know.) Aubrey Plaza is Fernanda, the bitchy nun who keeps wandering off to fetch the runaway donkey, and other things.

It’s a bit shocking at first to hear women in head-to-toe habits dropping f-bombs left and right, not to mention their occasional, inexplicable cruelty.

Massetto’s contretemps with his former master, Lord Bruno, is a festive side adventure of its own, with Nick Offerman as the glowering aristocrat constantly raving about “the Florentine conspiracy” and other threats to his wealth and status. No one does the combination of facial hair and peevishness better than Offerman.

Two late arrivals are Fred Armisen as the area bishop dropping in for an inspection, and Jemima Kirke as Marta, a childhood friend of Fernanda who helps magnify her livelier interests.

Soon Massetto finds himself repeatedly bedded, willingly or not, in what feels like a slowed-down Benny Hill caper. Meanwhile, the ongoing confessions with Father Tommasso become increasingly more interesting. Eventually things wind up in the forest, very bizarre and bare.

A fun and frothy fable about devotion, sex and whether they can be reconciled, “The Little Hours” shows that nuggets of comedy can be panned from just about any stream.