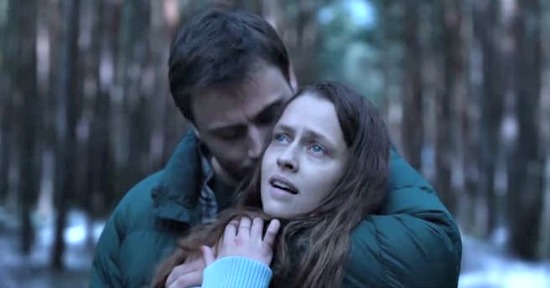 As I was researching video release details about “Berlin Syndrome,” I saw its genre described by one source as “Sex Horror.” After a good chuckle, I realized that’s as apt a description as there is.

Teresa Palmer plays Clare, an Australian wannabe photographer from Brisbane (“BRIS-bun,” she corrects her host, not “Briz-bane”) visiting Germany to take pictures of buildings, experience life and maybe publish a book out of it. She’s doing it the cheap/student pathway, staying in hostels and limiting her purchases to kitschy little nooks.

Then she bumps into Andi (Max Riemelt), an intense/charming local who shows her some hidden corners of Berlin. A bit awkward and self-doubting, Clare allows herself to be quickly romanced and bedded.

Curiously, he accidentally locks her in his apartment the next morning while he goes to work as an English teacher. He lives in a remote old building on the far end of a courtyard, and no one can hear her calls for help. He returns and they commence canoodling again, with some light teasing about remembering to leave the key this time.

Then it happens again, and Clare discovers the windows are unbreakable, her cell phone has disappeared and she’s really his captive.

Director Cate Shortland, working from a script by Shaun Grant, goes through the usual motions of Clare frantically searching out ways to escape, including physical confrontation with the much stronger Andi. But the filmmakers are more concerned with how things play out emotionally between these people.

Time goes on, weeks turning into months. Andi has been using her phone to text reassuring messages to her mother. Meanwhile, he navigates a fraught relationship with his father (Matthias Habich), who wonders why his son keeps getting into romances with tourists whom he never gets to meet.

Andi seems convinced they’re in an actual relationship, and after an initial period of fear and loathing, Clare starts to act that way, too. (The title is reference to “Stockholm Syndrome,” a psychological phenomenon in which the kidnapped come to identify with their captors.) She dresses sexily for him and allows him to take Polaroids of her for his scrapbook. It should come as no surprise that Clare eventually learns this is not Andi’s first go-round in such a weird arrangement.

“Berlin Syndrome” is an interesting, disturbing film with a decent amount of tension. I found it an odd choice to focus more and more on Andi’s story than Clare’s, especially in the second half. There’s only so many shots you can have of her aimlessly wandering around the apartment, I guess.

The lesson is that the line between passion and fear is a lot thinner than we’d care to think.

Alas, my aforementioned research was in vain: I couldn’t find any details about Blu-ray/DVD bonus features. Rather than assuming there aren’t any, I’ll forego assigning a grade.