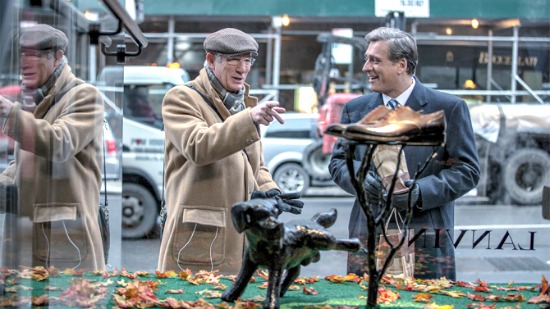 Richard Gere is pushing 70, an age at which most movie stars who want to continue to working slide into supporting roles for younger thespians or move to TV/streaming shows. Not Gere. He continues to take starring roles in good films, showing again and again how underrated he has been as an actor.

They’re smaller films -- probably you’ve never seen many of them, or possibly even heard of them. But you gotta respect the guy for continuing to do quality work in the medium where he staked his ground.

In “Norman: The Moderate Rise and Tragic Fall of a New York Fixer,” he plays a wannabe power broker who’s really a pathetic Willy Loman figure and doesn’t want to admit it to himself. He’s perpetually on the move, dropping names and spinning lies, wearing the same coat and hat like they’re part of his DNA.

Most Wall Street financiers and politicians dismiss Norman for what he is -- a hanger-on with no real influence or juice. Even his nephew (Michael Sheen), a rising lawyer, tries to gently bring him down to earth.

But then Norman gloms onto a promising young Israeli politician named Micha Eshel (Lior Ashkenazi), buying him a pair of shoes in a fancy men’s clothier and finally nailing that “in” he’s been searching for his whole life. When the younger man unexpectedly comes into power, Norman finds himself feted, but also his life of flimflam investigated.

Facing pressure from all sides -- including his synagogue, which insists he use his new mojo to secure millions to save their building -- Norman starts to collapse into the web of lies he’s been furiously spinning.

Written and directed by Joseph Cedar, “Norman” is a smart, tragic and surprisingly funny look at how ambition can consume everyone, the big fish and the small. And featuring an actor who refuses to go quietly into that good Netflix.

Bonus features are rather modest. There is “Norman: Making the Connection,” interviews with cast and crew from the red carpet premiere, and “An Evening with Norman,” an Q&A with Gere and Cedar.