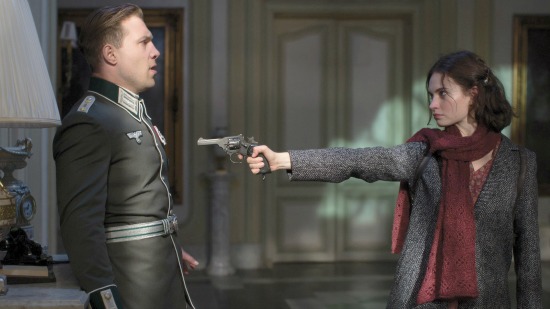 “The Exception” is generally a pretty solid war romance/drama, with the exception of the confusion regarding its title.

It would seem to refer to the German army office played by Jai Courtney, who eschews the more brutal aspects of the Reich and was nearly court martialed for beating another officer who murdered women and children on the Polish front. Several times Captain Stefan Brandt is told his outlook is the exception and not the rule for those who serve Adolph Hitler.

Or maybe it’s Mieke, the Dutch woman played by Lily James who is actually a secret agent of the British, who carries on an affair with Brandt. We figure she’s doing it as part of her mission, but soon it becomes clear they share true feelings for each other -- especially after he learns of her identity as a spy and a Jew. She’s the one who keeps telling him how much of an outlier he is, but in truth Mieke is the more exceptional of the two.

The most interesting person in the movie, however, is Christopher Plummer as Kaiser Wilhelm II, the deposed monarch of Germany living in exile in Holland. Aged, proud and rather deluded, he dreams of being returned to the throne with the consent of Hitler. The courtly man takes a grandfather-ish interest in Mieke, even blessing her affair with the German officer charged with guarding him.

Director David Leveaux and screenwriter Simon Burke based the movie upon a novel by Alan Judd, which is a complete historical concoction, at least in terms of the spy intrigue. By all accounts, Wilhelm and his second wife, Hermine (Janet McTeer), lived quietly in luxury, a sort of gilded cage, until his death at age 82.

I should also point out that the spy’s exact purpose never really becomes clear. Is she supposed to kill the Kaiser? That would probably have simply taken an expensive burden off the Reich’s hands. Later, when Heinrich Himmler himself comes to pay a visit -- played unnervingly by Eddie Marsan, who specializes in this sort of thing -- we expect Mieke to set her sights on him instead, but nothing ever comes of it.

A Gestapo agent (Mark Dexter) is sent to go sniffing, using fancy radio technology to track down the signals sent from the nearby village by Mieke’s spy handler, the local priest. It all culminates in familiar scenes of screeching cars, jackbooted men tromping up and down stairs, rooms being clumsily ransacked for evidence.

So in the end, her purpose as a spy is simply to be chased.

Many movies have a MacGuffin, a thing of vague utility other than to be what every character in the movie is directed toward. This is the only film I can think of where the MacGuffin is a person instead of an inanimate object.

The romance between Mieke and Brandt is tender and believable enough. Courtney strikes the part of an arrogant Aryan Nazi who nonetheless bears wounds, physical and otherwise, he’s trying hard to keep hidden. James is affecting, projecting both shining strength and vulnerability as a woman whose emotions run ahead of her judgement.

Also notable is McTeer as the princess, quietly scheming for her husband’s return to power while obviously doing it as much for her own fortunes as his. She gets a great scene where the imperious woman, used to lording it over others, is forced to demur to another. And I liked Ben Daniels as von Ilsemann, the colonel who acts as the Kaiser’s aide-de-camp and confidante, dexterously navigating between several gravitational pulls of influence.

But it’s Plummer’s movie in the end, in another splendid turn for the marvelous thespian. There’s often an aspect of overt theatricality to his performances, but as he’s aged these have rightfully comet to be seen as a feature rather than a bug. He makes every tiny gesture or expression – a narrowing of the eye, a hand smoothing his uniform -- seem ripe with meaning.

“The Exception” never quite gets around to figuring out which is the main character, or finding its narrative focus. Still, it has well-drawn characters and a pervading sense of peril amidst the passion.