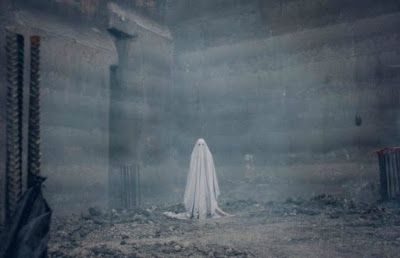 A few years back writer/director David Lowery made the expressive, offbeat “Ain’t Them Bodies Saints” starring Casey Affleck and Rooney Mara as a star-crossed couple whose story is pulled along more by imagery and music than a conventional narrative.

Now the trio has reteamed for another film that pushes the boundaries of the cinematic experience even further, and with keener effect.

“A Ghost Story” may sound superficially like “Ghost,” in which Patrick Swayze famously played a dead man whose spirit lingered long enough to watch over his beloved. Similarly, the Affleck character (nobody’s ever named) stays in his old house after his death, watching his girlfriend (Mara) as she mourns and, eventually, moves on.

Thematically, though, the films couldn’t be wider apart.

Affleck is represented entirely in his afterlife like a cheap Halloween ghost: literally, just a voluminous white sheet with two ragged eyeholes cut out. At first off-putting or even slightly comic, the look soon becomes a totemic representation for a soul who has always been wandering, even as it refuses to leave its chosen domain.

The ghost mostly just stands around, observing the doings of the living with an air of pained regret. It also walks about seemingly normally -- people amble by unawares, rather than passing through an immaterial figure.

For him, time flows with great irregularity, a turn of the head resulting in days or even weeks passing in the living world. We get the sense of a guest stranded in a vast museum, who becomes enraptured with small details and doesn’t notice when the doors open and close.

We see glimpses of their life before, as she urges them to move out of their decaying rural home to someplace nicer in the city, but he resists with a form of passive obstinacy. Later, the ghost has further encounters with others, about which I’ll say no more, other than these do not conform to a strict temporal progression.

Shot mostly in a single derelict house for a reported budget of $100,000 -- or about how much they spend on one week’s worth of catering on a superhero flick -- “A Ghost Story” is an indescribably eerie, affecting experience.

It is very deliberately paced, with Lowery holding his camera for long unmoving takes and unspoken pauses. For instance, there is one scene that goes for probably five minutes, consisting entirely of Mara wolfing down a giant pie.

And yet, rather than becoming boring, time flew. I was astonished when the closing credits came up; I had assumed we were only 30 or 40 minutes into the movie.

Once again Lowery teams up with musical composer Daniel Hart, whose blend of melodies and atonal sounds adds immeasurably to the moody mixture. There are portions of the score that sound like just random clangs and effects, other parts with the grand air of church music, and even an eerie art-pop song sung by Affleck’s character, a musician in life.

It’s hard to judge Affleck’s performance using a traditional ruler -- after all, some might say, all he does is literally stand around with a sheet over his head. Mara and other actors -- notably Sonia Acevedo and Will Oldham -- project an unfailing naturalistic quality; we never catch them performing for the camera.

I’m quite sure “A Ghost Story” is not everyone’s bag. Many will find it dull or maybe self-indulgent. But for those with patience and curiosity, here is a truly audacious take on the hereafter that makes us desperately cling to the now.