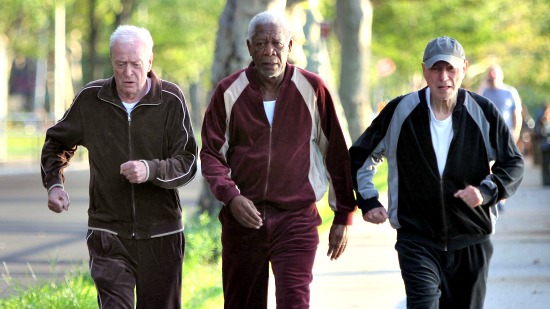 Three old guys hard up for cash and with an axe to grind turn to a life of crime -- or, at least an outing -- and in the process discover a sense of purpose that’s been missing.

Sound familiar? And not just because “Going in Style” is a remake of a 1979 film. It turns out movies about oldsters robbing banks and such are a veritable enterprise unto themselves.

There are zero surprises to be had with this dramedy caper starring Morgan Freeman, Michael Caine and Alan Arkin. We know how everything’s going to go, 1-2-3. Part 1: Grievances. Part 2: Planning the Heist. Part 3: Things Don’t Go Exactly as Planned, But Turn Out Fine.

Freeman plays Willie, Arkin is Albert and Caine is Joe. All three are retirees from the same steel company that’s pulling up stakes and moving overseas, dissolving their pensions in the process. Turns out their bank is complicit in the move, so they feel no qualms about robbing the place.

They’re not greedy: They just want what they’re owed, and not a penny more.

John Ortiz plays a career criminal who hooks up with the boys and walks them through the paces. Matt Dillon plays the obtuse FBI agent leading the chase. Ann-Margret is the local seventysomething hottie who casts an amorous eye at Albert.

“Going in Style” isn’t a bad movie, just an unambitious one. With three great actors like this, you could just have them read random Tweets onscreen and it’d probably be equally entertaining.

Bonus features are rather modest in scope. The DVD version contains a feature-length commentary track by director Zach Braff. Upgrade to the Blu-ray combo pack, and you add a handful of deleted scenes.