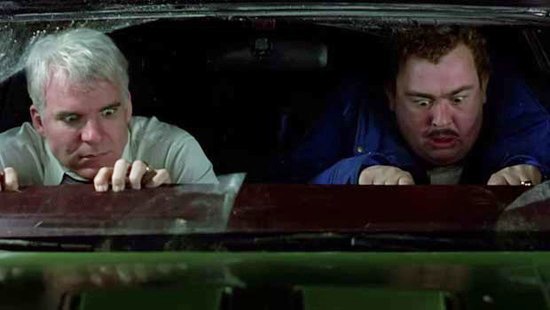 Everyone is entitled to their opinion, and mine is this: "Planes, Trains & Automobiles" is simply one of the funniest movies every made, not to mention a beacon of absolute joy.

I can't think of a film that I have laughed at harder, longer or more consistently. And it's not especially sophisticated humor -- mostly pratfalls, gross-out moments and personality clashes. It's the classic odd couple tale, with a more or less straight man bothered and befuddled by a loudmouth lout. These are signature roles in the careers of both Steve Martin and John Candy.

With a few script changes, you could easily have made it in the 1940s with Bob Hope and Bing Crosby.

It's hard to believe it's been 30 years since "Planes" came out, but here it is getting a very nice Blu-ray combo pack video reissue from Paramount. This is definitely one that will stay in my library. It includes a great transfer plus plenty of cool bonus material, including a press footage from the film's promotional tour and a comprehensive overview of the career of John Hughes.

Up till then Hughes had been known exclusively for teen dramedies, so it was considered a big risk at the time for him to make an R-rated comedy featuring a pair of middle-aged men. The film was a critical and commercially successful, though not a runaway hit. Its reputation has only grown with the years.

You know the story: persnickety marketing executive Neal Page (Martin) is trying to get back home to Chicago for Thanksgiving after his meeting in New York runs late. He is repeatedly foiled by circumstance and the intrusion of Del Griffith (Candy), a jovial traveling salesman who hocks shower curtain rings. They ping-pong back and forth between antagonism and cooperation as they make their journey by the various conveyances listed in the title, along with a few others.

I can easily tell you the movie's high point for me. After having their plane grounded in Witchita by bad weather and their train broken down on the tracks, their cut-rate bus tickets only get them as far as St. Louis. (All their cash had been stolen by a motel thief.) Del manages to secure a rental car -- using Neal's credit card, which had earlier gotten switched between wallets by the hapless motel operator, Gus (Charles Tyner) -- and they're cruising down the road.

(The car, an ugly little green Chrysler LeBaron Town and Country convertible with wood paneling, surely must be the diminutive cousin of the station wagon from "Vacation.")

This entire sequence is 10 minutes or so of pure hilarity. Hughes warms us up with some contretemps over the passenger power seat, which Del manages to break. Then Del loudly cranks up the radio playing Ray Charles' "Mess Around" while Neal snoozes next to him. Del be-bops and shakes his thing while driving down the road in the middle of the night, repeatedly looking over to Neal, hoping he'll wake up and join in.

It's a tiny encapsulation of their entire relationship: Del, the man who can't stop reaching out, and Neal, the guy who just wants to be left alone.

Del gets his coat sleeves caught on the seat while trying to remove it, leading to a crazy screaming spin-out that finally awakens Neal. Del, trying to cover up his latest screw-up, reassures him and starts driving again, not realizing they're going the wrong way on the interstate. Failing to heed the warnings of another motorist, they carom between two semis, a fireworks of sparks spraying everywhere. Neal looks over at Del and envisions him dressed in the full red devil's suit, from horns to cape, laughing with wild glee.

Funny stuff, but what follows is even funnier. As they realize how close they've come to death, each man discovers the extent of their peril. Del has bent the steering wheel in half, and Neal gripped the dashboard so ferociously that he's left finger-shaped indents, an audible pop sounding as he pulls his hands free.

If you don't bust a gut laughing at that, I can't help you.

I love that the mystery of Del's oversized trunk is never solved. He trundles that thing everywhere, platooned with stickers and an endless source of grief. It's his totem and, quite literally, his baggage. Does he keep his shower rings in there? Souvenirs from his wife? Like the glowing suitcase in "Pulp Fiction," it works better because it remains a mystery.

Watching the film again for the first time in awhile, I was struck by how many cameos there are by recognizable performers -- character actors and future stars. Kevin Bacon plays the young businessman who outraces Neal for a cab at the start of the film. Owen, the redneck son of the Witchita motel owner who gives them a ride to the train station in Stubbsville, is played by none other than Dylan Baker, doing a bestial snort/croak thing that's impossible to mimic without giving yourself an anyeurism.

William Windom has a cameo as the corporate honcho whose indecisiveness results in Neal being late for his plane, and Lyman Ward, who played the dad in Hughes' previous film, "Ferris Bueller's Day Off," is Neal's colleague from Chicago. Bill Erwin does his signature cantankerous old man routine on the plane, and Ben Stein turns up as an airline worker delivering catastrophic news in soothing, dulcet tones.

Larry Hankin, whose specialty is playing skeevy interlopers, plays Doobie, the Kansas taxi driver with a pimped-out muscle car. Michael McKean plays the state trooper who makes Del and Neal take their burnt-out rental car off the road. Martin Ferrero, another classic "that guy" actor known for his snivelly connivers, most notably the lawyer who gets chomped by a T-rex in "Jurassic Park," is the motel clerk who accepts bribes in lieu of cash. He happily pockets Neal's expensive wristwatch, but resists Del's energetic sales job for his Casio, even after Del dangles the cheap ticker over his knuckles in full trade show mode.

Without a doubt the most iconic cameo in "Planes" belongs to Edie McClurg, who's made an entire career out of her chirpy voice, Midwest accent and matronly demeanor. She plays the car rental agent upon whom Neal unfurls a banner of f-bombs as long as your arm after he's ditched in the distant parking lot with no car. It's the most famous scene in the movie bar none, with Neal using the f-word in gerund form dozens of times before Edie lands the punchline using the same base word as a descriptive adjective.

Interestingly, without this scene and one or two other brief bits of language, "Planes" could have easily gotten away with a PG rating from the MPAA. Well, there's also the "two pillows" scene, which is probably the second most memorable scene.

Let's talk about that for a minute.

Seen today, the motel room sequence would probably be frowned upon as a homophobic example of gay panic. Forced to share a double bed, they awake in the morning to find themselves snuggling contentedly, with Del giving Neal an affection nibble on the earlobe for good measure. Then, of course, they discover the location of Del's other hand, between two pillows that are not actually pillows. They leap to their feet, screaming in disgust, then quickly covering up the awkward moment with football chatter about the Bears.

Hughes and audiences probably took the scene at face value in 1987. Seen today, though, I think the joke endures with a distinctly different color. In their half-awake state of sleep, both men are quite happy to share physical closeness and a mild bit of affection. It's only when their grogginess is punctuated, and they realize how this scene must appear, that their instincts kick in to reassert their straight self-image.

The joke is not that they might be gay, but that they're petrified of others thinking they are.

There are so many other memorable moments of "Planes, Trains &; Automobiles" to mention, but time and space runs short. Such as Del raising cash for their trip by passing off his shower rings as fashionable ladies' earrings -- which, given the state of '80s fashion, is not so incredulous as you might think.

If you haven't caught "Planes" in a while, I urge you to go back and check it out again. It's one of the true comedic gems of the 1980s.