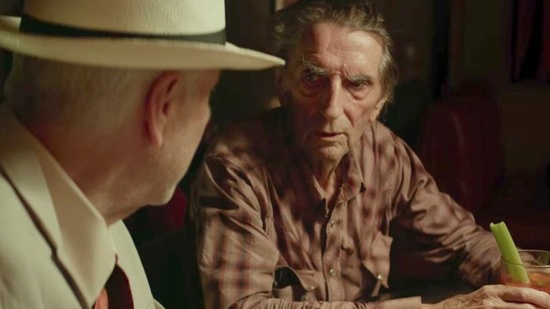 “Lucky” is not so much a story as a spare character study. The film will be forever remembered as the last starring role of the great character actor Harry Dean Stanton, whose movie career didn’t really take off until he was in his 40s.

Still, that was enough for a half-century of indelible roles, punctuated by Stanton’s signature sharp, gaunt visage – like a matinee idol who’d been sucked on a bit by a vampire – and languorous, offbeat line delivery.

No matter what character he was playing, Stanton never seemed in a hurry to get where he was going.

I doubt there’s ever been a more distinctly Harry Dean Stanton role than the one he has in “Lucky,” playing the titular character, a 90-something cowpoke who saunters around his sleepy little Western town, always up to not much at all. With his sad, droopy eyes and battered straw hat, Lucky is like the town’s resident mascot.

A creature of habit, he patters through the routine of his days: calisthenics, a walk into town for coffee at the local diner, a stop at the corner market for cigarettes or milk – all he consumes, as far as we can tell – more moseying, TV game shows, his evenings spent with a Bloody Mary at one of the two watering holes in town, where the same creatures come out every night.

Lucky used to go to the other bar, but got thrown out – or walked out, in his telling – for lighting up indoors long after that sort of thing became verboten.

A prideful loner, Lucky was in the Navy during World War II, and we don’t really know what he’s been doing in the 70-odd years since. Never married, no kids he can lay claim to, no pets, no responsibilities, no close friendships. He makes odd, one-sided phone calls to someone who appears to be a pal, mostly picking words out of the dictionary and discussing them.

It may not seem like much of a life, but it’s one Lucky holds to with fierce conviction. This is the sort of man who will challenge a fellow half his age to a fistfight if he thinks the guy is taking advantage of a friend.

When he sustains an inexplicable fall in his home, the wind goes out of Lucky’s sails. The doctor (Ed Begley Jr.) says he’s in exceptional health – something he can’t explain given Lucky’s pack-a-day habit. Just getting older, he shrugs. We get the sense Lucky could handle a dire pronouncement, the C-word or such. But just not knowing vexes him to his core.

“Lucky” is really a story of new beginnings. Is Lucky preparing for the end, looking for answers about the meaning of life, or trying to break out of his shell? Perhaps a mix of all three.

The creative team are all filmmaking veterans trying out new roles. John Carroll Lynch, another noted character actor, steps behind the camera for the first time as a director. Logan Sparks and Drago Sumonja have also worked as actors and crew members, now trying their hands at screenwriting.

I do wish “Lucky” had a little more narrative momentum than it does. The movie plays out mostly as just a series of encounters between Lucky and other townsfolk. Beth Grant plays Elaine, the matron of his bar, who likes being the center of attention. James Darren plays her main squeeze, who gets a nice speech of his own. David Lynch plays another odd oldster with a runaway tortoise.

Tom Skerritt gets the best supporting part, a small bit as a fellow veteran Lucky connects with at a diner. He gets a 4- or 5-minute speech that’s right up there with Quint’s U.S.S. Indianapolis soliloquy from “Jaws.”

“Lucky” is not a movie about an old man who goes on a journey, but one who comes to take the first few steps. Though I wish we could’ve followed him a little further down that path, it’s a fitting coda for Stanton, who gets to ride off -- or, rather, amble -- into the sunset on the back of one of his best roles.


Posted by Christopher Lloyd at 10:45 AM