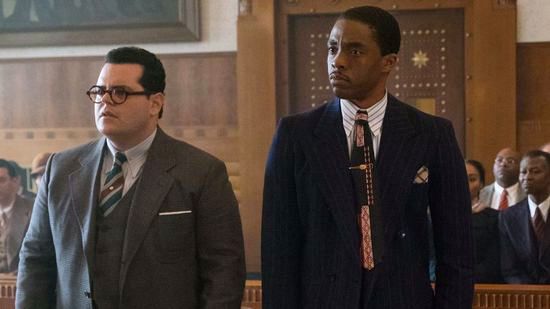 Chadwick Boseman has played James Brown and Jackie Robinson on the big screen, superlative performances both, and completes a trifecta of historical biopics with "Marshall," an engaging look at Supreme Court Justice Thurgood Marshall during an early point in his career when he was a rabble-rousing lawyer for the NAACP.

The movie is a straight-down-the-line "great man" drama that does everything very well without taking any chances or breaking new ground. The only unexpected turn is Boseman's take on the legal giant, portraying him as brash bordering on cocky, a two-fisted drinker who also uses those same knuckles against fat-faced racists when they inevitably come a-knockin', in a scene that's a bit of pure Hollywood hokum.

(Question: why are all the villains in historical racial injustice stories big, beefy guys? Didn't they have any lean racists back in the day?)

Josh Gad co-stars as Sam Friedman, a mousy insurance attorney in Bridgeport, Ct., who gets roped into being Marshall's partner in the trial, because the patrician judge (James Cromwell) doesn't want to approve any uppity (code word) out-of-town lawyers for the sensational case. He's also good friends and former law partners with the dad of the prosecutor, played by Dan Stevens in full flaring nostrils mode.

Set in 1941, the story (screenplay by Jacob and Michael Koskoff) centers on a rather unknown part of Marshall's life, when he acted as co-counsel in the defense of Joseph Spell (Sterling K. Brown), an African-American chauffeur who was accused of brutally raping his master's... oops, excuse me, employer's wife, Eleanor Strubing (Kate Hudson).

The case has enraged the entire community, the sort of thing we usually only see in Southern cinematic settings. Marshall is the only attorney for the legal defense fund of the NAACP, making it his business to travel around the country defending black people falsely accused of crimes because of their race.

"Marshall" is directed by Reginald Hudlin, who was one of Hollywood's busiest directors during the 1990s but hasn't made a feature film in 15 years. He gets terrific performances out of his cast, and shoots the film beautifully with vintage cars and costumes. (Boseman is decked out in gorgeously contrasting three-piece suits.)

The heart of the film is the relationship with Friedman. It's nice to see Gad doing a non-comedic, non-musical role for once. He plays Friedman as a timid man who comes to discover reservoirs of iron underneath his nebbish facade.

It's not a partnership of equals: because Marshall is forbidden to speak at trial by the judge, Friedman essentially acts as his co-counsel's puppet in the early going, gradually coming into his own as a lawyer and as a man because of Marshall's tutoring.

On the one hand, I recognize that "Marshall" is rather conventional filmmaking, setting us up with the usual surprises and changes in tempo. (You can practically count down to the moment when Marshall and Friedman, having come to gain a measure of respect for each other, are split by circumstance and renew their hostilities.)

But it's hard to deny this is a smartly acted, entertaining movie about one of the titans of the civil rights movement. What "Marshall" lacks in originality it more than makes up for with assured confidence and capability.