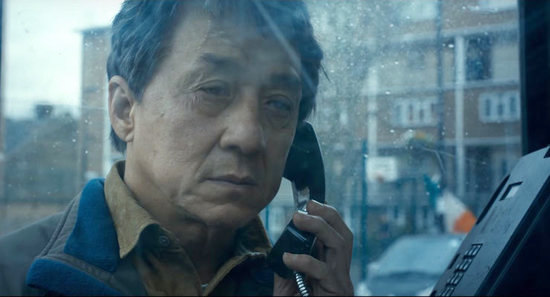 “The Foreigner” is a novel concept: a Jackie Chan movie in which Jackie Chan is completely unnecessary to the plot.

I’m exaggerating, but only slightly. This joint Chinese/British production has all the hallmarks of a Chan film: chop-socky action, Westerners underestimating an undersized Asian man, and cool/quirky stunts in which the 63-year-old action star demonstrates he’s still got plenty of spring in his step.

But really, with a little rewriting you could completely eliminate his character, Ngoc Minh Quan, from the movie without missing much of a beat. The real heart of the story is about an internal struggle within the IRA, with Pierce Brosnan playing the smooth political operator trying to keep the peace, attempting to stave off young upstarts blowing things up and threatening the détente with the Brits.

The set-up is that Quan’s teen daughter (Katie Leung), is killed during a gruesome bombing, and vows revenge. Everyone dismisses the timid little restaurant owner, who keeps persistently calling and showing up in people’s offices. His chief target soon becomes Liam Hennessy, an Irish deputy minister who used to be part of the IRA brigade but these days plays both sides.

Brosnan, as Hennessy, brings smarmy charm and a buried volcano of rage, trying to find a solution that serves both his IRA allies and the British authorities. Meanwhile, this nettlesome “Chinaman” keeps getting in the way.

Needless to say, Quan turns out to be a whole lot more capable than anyone imagines. His part of the story is sort of a mix of Sylvester Stallone in “First Blood” and Liam Neeson in “Taken,” content to leave others alone but ready to whip out a mondo-sized can of whup-tushie when confounded. He has a very specific set of skills…

Charlie Murphy plays Maggie, Hennessy’s mistress who has a little more to her story; Ray Fearon is the chief police inspector on the case, looking to cut a deal with Hennessy; Orla Brady is Hennessy’s wife, who has her own old resentments stirred up; Dermot Crowley is one of Hennessy’s old running buddies; and Rory Fleck Byrne plays Hennessy’s nephew, who has a military background that’ll come in handy later.

In case you didn’t notice from that summary, all the main supporting players are all defined by their relationship to Hennessy, not Quan. It’s a pretty standard-issue procedural thriller, as various forces converge to stop a terrorist plot. But then this odd little man shows up and throws everyone’s plan into kerflooey.

Chan seethes as the determined father who harbors a lot of secrets and past pain. But let’s face it, he’s a star in the Schwarzeneggerian mold, featured for his physicality rather than his emoting. His mask of rage looks more like a peptic ulcer.

Directed by Martin Campbell, who helmed a few James Bond films and the execrable “Green Lantern,” from a screenplay by David Marconi based on a novel by Stephen Leather, “The Foreigner” works reasonably well as a martial arts action flick, and as political thriller. Only trouble is, those parts don’t go well together, like mismatched suit pieces that clash rather than complement.