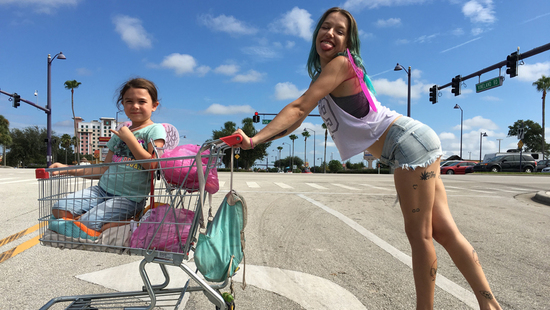 “Do you know why this is my favorite tree? Because it’s tipped over but it’s still growing.”
--Moonee


It is the nature of children to adapt to circumstance, even that which no child should have to bear. Their intrinsic miracle is that they can find joy just about anywhere.

In “The Florida Project,” 6-year-old Moonee (a vibrant Brooklynn Kimberly Prince) lives on the edge of the most magical place in the world, the Walt Disney Resort near Orlando, Fla. But hers is not the world of $100-a-day admissions to theme parks, luxury hotels and getaway vacations.

Rather, it’s the seedy underbelly of minimum wage workers who feed the tourism machine, living in towns like Kissimmee, packed together in squalid motels slapped with bright paint so as not to depress the out-of-towners when they’re passing by on their shuttle bus to the Magic Kingdom.

I did not grow up in this world, but I observed it from close at hand. When you are reared in a town that’s famous for visitors coming and going to partake in illusions, you quickly learn that perception and reality are often at cross purposes.

(I still chuckle upon meeting people who say they found Orlando “too touristy,” and with a few queries ascertain that they never got closer to the city’s downtown than International Drive, aka “I-Drive,” some 15 minutes away.)

In the stifling humidity of the Central Florida summer, where shirts are stuck perpetually to the smalls of backs, Moonee and other kids roam feral between the motels and third-rate tourist attractions, unattended by working mothers and long abandoned by their fathers. Moonee and her best friend, Scooty (Christopher Rivera), curse, spit on cars and hit up soft strangers for free ice cream.

Their behavior is a little shocking at first, but director Sean Baker (“Tangerine”), who co-wrote the script with Chris Bergoch, soon settles us into an episodic rhythm of observation. We witness the strong connections between these children, and come to see their daily life as not so different from that of Scout and Jem roaming around their quaint town in “To Kill a Mockingbird.”

Watching over them is Bobby (Willem Dafoe), the beneficent manager of the fuschia-hued Magic Castle motel where Moonee and Scooty live with their mothers. Part caretaker, part social worker, part cop, Bobby works tirelessly to keep everything aboveboard, though there’s always something broken. Bobby repeatedly threatens to throw people out, but the offer of another last chance is always forthcoming. Seemingly the only line he’s unwilling to cross is allowing prostitution to take place on “the premises.”

There’s not a lot of narrative to “The Florida Project,” just the ebb and flow of the summer tide. Kids rotate in and out of Moonee’s circle, with shy, red-haired Jancey (Valeria Cotto) entering the sphere and gradually absorbing its brash energy.

Bria Vinaite plays Halley, Moonee’s mom, an occasional stripper who’s always on the prowl for a quick buck. Tatted up generously, with a slattern strut and hair to match the Magic Castle’s walls, Halley works the nicer locales where the tourists stay, crashing the free breakfast buffets and buying cheap perfume to sell at markup. She brings Moonee along to help with the pitch, because what kind of scammer brings a little kid with them?

The movie edges right up to daring us to condemn Halley, but then keeps pulling us back. Any conventional narrative would quickly dub her the villain of the piece, the quintessential terrible mother. But Baker also asks us to revel in Halley’s defiant rebel nature, a woman clinging to the last rung of society’s ladder, extending two middle fingers to anyone who would disparage her, or especially her kid.

There’s a quick scene where Halley gives the helpful woman who works in the Magic Castle’s laundry some weed, and she thanks her with a hug, saying everything will be all right. Halley limply accepts the embrace, indifferent to the woman’s soothing outreach, and we sense that Halley is not simply a mean person, but one in whom some of the gears that guide emotionality are just plain missing.

“The Florida Project” is a triumph of grainy verisimilitude. Watching the film is like stepping behind the backdrop of a theater stage to find real life, grimy and exuberant, turning away behind the pretty façade.