Review: "Too Funny to Fail" 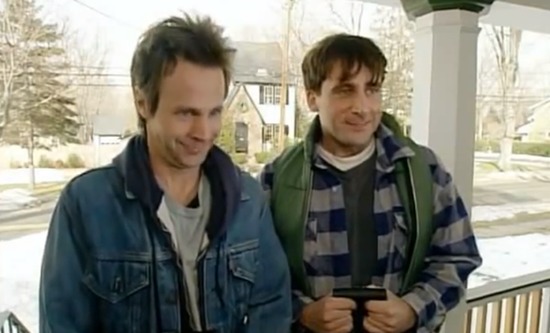 Imagine you're a television executive and someone pitches you a show: it will be headlined by one of the biggest "Saturday Night Live" stars, Dana Carvey. At the time, he is fresh off co-starring in the "Wayne's World" movies, and everybody wants a piece of him -- he actually turns down David Letterman's gig after he decamped to CBS. Carvey can literally do anything he wants, and he chooses to have his own sketch comedy show.

ABC is giving you their full backing and a fat budget. The showrunner will be Robert Smigel, another legendary SNL alum. The head writer will be Louis C.K. Charlie Kaufman is another. The two big acting recruits will be a pair of young sketch geniuses, Steve Carell and Stephen Colbert. A bunch of other super-talented performers and writers are in the mix, including Jon Glaser and Robert Carloc.

Oh, and the thing will go on right after the single top-rated show on all of TV. A sure-fire can't-miss, right?

Or so everyone thought. "The Dana Carvey Show" lasted all of seven episodes in 1996 -- a crashing failure so bad it's barely even remembered by audiences today. Also plagued by health problems, including open-heart surgery the following year, Carvey's career as a film and TV star was effectively over.

And yet the short-lived debacle touched a lot of lives. It helped groom the next generation of comedy giants.

One of its popular bits, a cheeky animated superhero parody, "The Ambiguously Gay Duo," would move to SNL and become a staple for years. Colbert would be recruited by the rejuvenated "The Daily Show" based on his work on the Carvey show, and he would insist they hire Carell as well. We know how they turned out.

Now, Hulu is presenting "Too Funny to Fail," a feature documentary about the Roy Hobbs of TV comedy, the show everyone thought would break the mold but would instead become its own punchline. It debuts Saturday, Oct. 21.

Directed by Josh Greenbaum, it's an insightful, wry and thought-provoking look at what goes on behind the screen of network television. ABC thought it was buying Dana Carvey's suitcase full of popular impressions and characters, from the Church Lady to President Clinton. What they got instead was a truly subversive show with off-the-wall scenarios and a puckish attitude.

The young renegades wanted to do their own thing, by their admission "draw a line in the sand" for audiences who weren't cool enough to understand their brand of funny. For their very first sketch, they chose to have the POTUS demonstrating his empathy by taking drugs to grow realistic-looking teats, and have him suckle live puppies and kittens on-air.

Quite literally, millions of people turned off their TVs after the first five minutes -- and they never came back. Critics were even less kind.

Another one of their ideas was to have the name of the show change every week with a rotation of sponsors. So the debut was "The Taco Bell Dana Carvey Show." The first show was such a train wreck, with national headlines talking about how offensive and unfunny it was, Taco Bell loudly announced they were cutting ties -- even though sponsors were only supposed to last one show.

But it started a virtual evacuation of advertisers. By the end, the sponsor was literally the local Chinese diner where the crew bought their lunch.

Festooned with in-depth interviews with nearly all of the principles -- Louis C.K. being the notable exception -- "Too Funny to Fail" comes at the perfect time, as the people involved in making the show have seen their careers recover sufficiently to laugh about how young and deluded they were.

Probably the least injured is Carvey himself, who had such high hopes and knew right away his enterprise was doomed. But it allowed him to be close to his family, raise his two young boys and return to standup on his own terms.

It's a cliche to say something was ahead of its time, but with "The Dana Carvey Show" I think that's literally true. Panned as racy and kooky, it was probably a better fit for late night than prime time. Certainly, it did not mesh well with its pedantic lead-in, "Home Improvement" starring Tim Allen.

One bit, a real promo for a maudlin "very special episode" of HI, followed by the "The Mug Root Beer Dana Carvey Show," had me laughing as hard as anything I've seen in awhile. Greenbaum knows how good the moment is, too, milking it with a collage of the interviewees guffawing over the clanging contrast.

Comedy is by definition highly subjective. In its (very short) day, not many people appreciated Carvey's show for what it was, rather than what they wanted it to be.