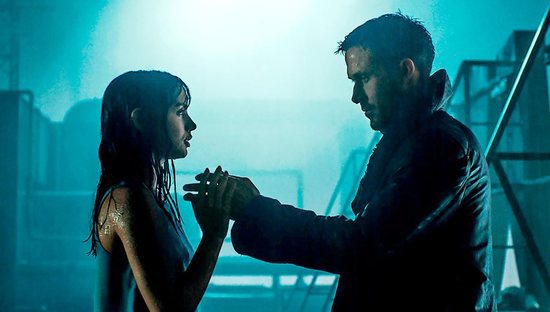 The truth: I didn’t really want a “Blade Runner” sequel.

Just as I did not want to see a live-action version of “The Lord of the Rings,” or a reboot of the “Mad Max” franchises. And yet I love those movies now, offshoots of things I cherished as a youngster -- edging to the point of favoring the new over the old, if my middle-aged self was unflinchingly honest with my teen me.

It’s brilliant, disturbing, sad, beautiful, tragic and filled with tempered joy. It continues the journey of a dystopian, not-so-distant future of bioengineered humans made to be servants of genuine ones, and how each struggles at the shackles that bind them together.

This is the rare sequel that is an extension which is both logically and emotionally sound. Having watched it, I can’t imagine it beginning, or ending, another way.

The film manages to introduce us to a new hunter of replicants, played by Ryan Gosling, while reuniting us with Deckard, as Harrison Ford reprises one of his most indelible roles. “I had your job once… I was good at it,” Deckard taunts upon their first meeting. It’s a titanic clash of generations, quite literally.

My suspicion arose chiefly because the sequel, which is set 30 years later than the original and arrives 35 years after, is not directed by Ridley Scott, who’s still around and quite busy at nearly age 80. Yet Denis Villeneuve (“Prisoners”) has perfectly captured the qualities that made the 1982 film so vivid and groundbreaking -- the sense of alienation, the way life is devalued simply because of its origin, the invasion of commerce into every corner of our lives.

Things are helped immensely by the return of original script man Hampton Fancher, joined by Michael Green, working from the novel by Philip K. Dick. (Though ever more loosely, it must be said.)

In this version, there is no question about the nature of Gosling’s blade runner: he is a replicant who hunts his own kind. Known by his serial number, KD6-3.7, or simply “K,” he moves freely among normal humans with a gun, an LAPD badge and all the powers that come with those tokens. Though he is (almost literally) spat upon by other police officers.

While on a routine “retirement” of an old-model replicant (Dave Bautista), K makes a discovery that sets off a world of strife. The old Tyrell corporation that created the first replicants, aka “skin jobs,” is long defunct. But Niander Wallace, a power-mad blind oracle played by Jared Leto, has crafted new replicants more pliable and palatable, which makes his otherworldly ambitions possible.

K’s boss, Lt. Joshi (Robin Wright), whom he addresses as “madam,” wants K to cover the whole thing up. But Niander’s right-hand replicant, Luv (Sylvia Hoeks), is ordered to follow the follower. She possesses an arresting combination of contempt and empathy for the humans who created people like her.

K has a quiet, constrained life, complete with a hologram wife to keep him from wanting more than the routine of ceaseless murder. Joi (Ana de Armas) is fully emotionally connected to him, even though she’s another product of Wallace’s omnipresent corporation. K uses his bonus for successful retirements to buy Joi an “emanator,” which allows her to leave their apartment and have some semblance of corporeal existence.

Slaves of slaves -- so where do the boundaries of servitude begin and end? These are the sorts of vexing thoughts the film raises for us.

Appropriately, this is one of the most hauntingly beautiful films ever made. Cinematography legend Roger Deakins gives us slants of organic light contrasted with inky pools of darkness, vivid colors, blasted landscapes and tactile displays of proffered flesh. Nominated 13 times for an Oscar without winning, Deakins may finally get his due.

At nearly three hours long, “Blade Runner 2049” is not an endless parade of action. People who have not seen the original movie in a while may be surprised in revisiting it how deliberate and contemplative the film is. Likewise, its cinematic inheritor blends moments of gripping violence with languid stretches where the characters just look, and are looked upon, think and react.

Rather than slowing things down, these sequences give the movie its rightful sense of weight and purpose. Here is the uninvited sequel, now indispensable.

Posted by Christopher Lloyd at 4:51 PM