Video review: "War for the Planet of the Apes" 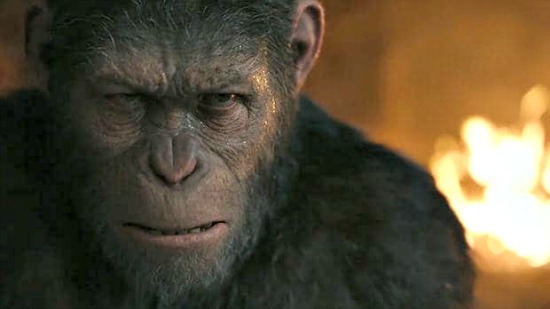 “War for the Planet of the Apes” didn’t do as well commercially and critically as its two predecessors, virtually reassuring that the reboot of the franchise will end as a trilogy. That’s a shame, because this is one of the best threesomes to come along in the action/fantasy wing of moviedom – due in large part to its eschewing of traditional summer movie tropes.

Directed by Matt Reeves from a screenplay he wrote with Mark Bomback, “War” is a surprisingly smart and contemplative film. There are plenty of action scenes, with human actors portraying apes through CGI and motion capture.

Once again Caesar is played by Andy Serkis, a pioneer of his own in the realm of motion capture. But for me it’s the quiet moments that are most technically impressive, as subtle emotions flicker across Caesar’s face. You have to pinch yourself to be reminded that what you’re seeing is made up completely of pixels mapped over Serkis’ visage.

The tale continues the journey of Caesar, who is more or less the Adam of talking apes within the franchise’s mythology. Here he must face off with a mad human colonel (Woody Harrelson) who seems intent on eradicating the simians – and a good chunk of the remaining humans, too.

“War” has often biblical overtones, as Caesar orders his tribe to go on an Exodus-like journey to escape the colonel’s clutches, while he and a few loyal followers stay behind to face him down. They also meet new apes, some who will become allies but also willing slaves of the humans.

Sad, thrilling and introspective, “War for the Planet of the Apes” stands apart from the typical summer blockbuster fare.

Bonus features are excellent. The DVD comes with a feature-length commentary track by director Reeves, a gallery of concept art and a featurette on Caesar as a protagonist. There’s also a nifty digital feature that shows side-by-side comparisons of 10 scenes with the raw performance capture next to the final CGI version.

Upgrade to the Blu-ray and you add 10 deleted scenes with commentary, four more featurettes and “Waging War for the Planet of the Apes,” an in-depth documentary on the making of the film.